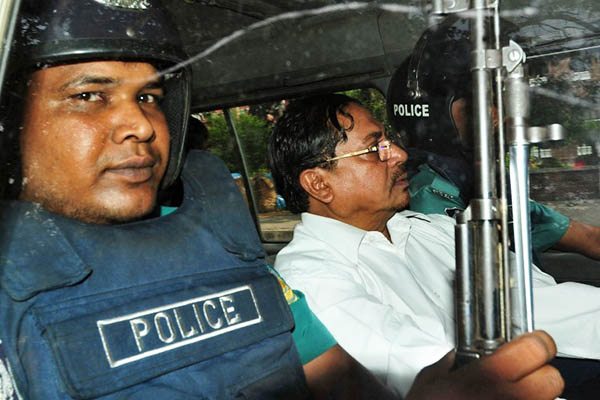 Violence broke out in Bangladesh on Monday after the country’s Supreme Court upheld the death sentence of a Jamaat-e-Islami leader convicted of committing war crimes, including mass murder, during the 1971 independence conflict.

The Supreme Court’s rejection of Mohammad Kamaruzzaman’s appeal means that he will now be hanged within months, unless the case is reviewed again or he is granted clemency by the country’s president.

The 62-year-old assistant secretary-general of the Jamaat-e-Islami will be the second senior Islamist to hang for crimes committed during the war that saw the former East Pakistan secede from Islamabad. The decision triggered sporadic violence across Bangladesh.

Islamist protesters set off more than a dozen crude improvised bombs, torched and damaged cars and pelted police with rocks, who responded by firing rubber bullets and tear gas. Jamaat also called a nationwide 48-hour strike from Wednesday morning to protest against the court’s decision.

The ruling came after another senior Jamaat official, Abdul Quader Molla, was executed in December after being convicted on similar charges.

The convictions of some of Nizami’s top lieutenants last year triggered the country’s deadliest political violence since independence. Tens of thousands of Jaamat activists clashed with police in protests that left some 500 people dead.

Critics say the latest flurry of judgments are designed to intimidate the opposition, which has been stepping up protests against Prime Minister Sheikh Hasina’s government.

In recent weeks Jamaat and the main opposition Bangladesh Nationalist Party have held a series of giant rallies to demand fresh polls after Hasina was controversially re-elected in January in a contest boycotted by the opposition.

Rights groups have said the trials have fallen short of international standards and lack any foreign oversight.

Hasina’s government maintains the trials are needed to heal the wounds of the conflict, which it says left three million people dead. Independent researchers estimate that between 300,000 and 500,000 people died in the 1971 war.

Kamaruzzaman was found guilty in May 2013 of mass murder, torture and abductions. The prosecution was centerd around a mass killing at the border town of Sohagpur, which has become known as the “Village of Widows,” after at least 120 unarmed farmers were lined up and slaughtered in paddy fields.

Three of the widows testified against him during his trial. “My mother did not live to see this day. I am sure this verdict would have lessened her pain,” said Jalal Uddin, whose father, a brother and five other relatives were shot dead in the carnage. “Thirty-one widows are still alive. They are happy,” said Uddin who heads the Sohagpur widows’ welfare committee.

Prosecutors said Kamaruzzaman was also an organizer of the notorious Al Badr militia accused of killing top professors, writers and doctors in one of the most brutal chapters of the nine-month conflict.

“We are extremely disappointed,” said defense lawyer Tajul Islam after Monday’s judgment, adding they would seek a review as the death sentence was upheld by a majority decision. However, Attorney General Mahbubey Alam said a review was unlikely and Kamaruzzaman could be hanged as soon as the verdict reached the jail authorities.

Security was tight in the capital ahead of the verdict, with heavily-armed police and paramilitary border guards patrolling the streets. “We are alert against any bid to create anarchy,” Dhaka police officer Saifur Rahman said.

A three-day strike called by Jamaat to protest against Nizami’s sentencing is set to conclude on Monday after forcing schools, businesses and bus services to shut down and triggering sporadic violence.   Five small bombs exploded in the capital late Sunday, but no one was injured, Rahman said.