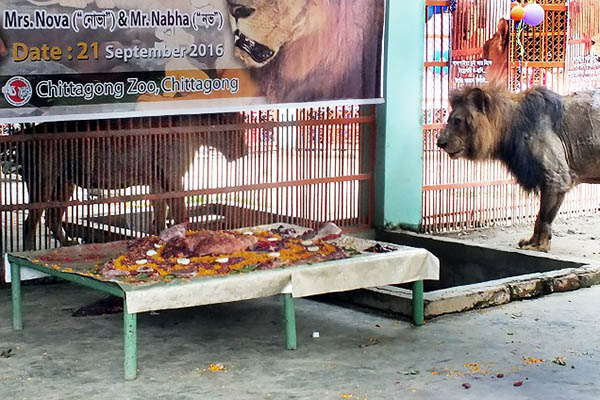 Bangladesh zookeepers have thrown two lions a wedding party that included a heart-shaped meat cake in the hope of drawing much-needed visitors and encouraging the animals to mate.

Some 400 guests attended the reception laden with balloons on Wednesday for long-time resident and lioness Nova and newcomer Nabha at the Chittagong zoo in the country’s south. “This is an unusual function no doubt. And we made an effort to give a festive look to this zoo with colorful decorations to welcome the union of the lion and lioness,” government administrator of Chittagong district Mesbah Uddin told AFP. “We brought the lion named Badsha, renamed Nabha, from the Rangpur zoo to stay here with the lioness Nova for the purpose of breeding,” Uddin said.

A pre-wedding party was also held for schoolchildren that included a small concert, deputy zoo curator Monjur Morshed said. But the highlight of the festivities was a 10-kilogram cake for the couple made mainly of meat that included beef, chicken, eggs and fried liver, he said.

Nova was born in Chittagong zoo some 11 years ago and has been living without a male partner for most of that time, until Badsha arrived two weeks ago. The lions would remain in separate but adjacent cages for another three days to give them time to get used to one another, Morshed said.