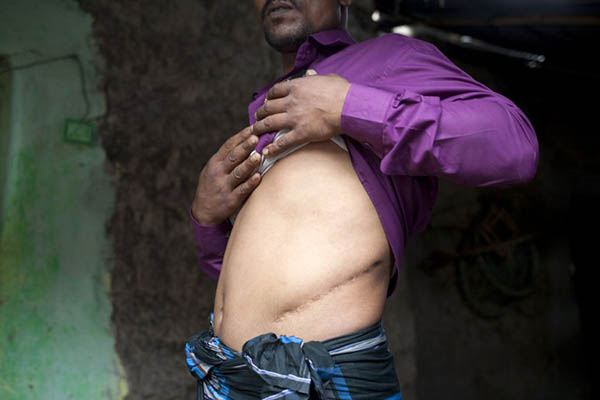 After years of crippling debt, Bangladeshi villager Rawshan Ara decided to follow in her family’s footsteps—and sell a kidney on the black market to raise cash. Like many of her neighbors in this poor farming area, the 28-year-old easily found a local broker and quickly became a victim of Bangladesh’s thriving but illegal organ trade.

The mother-of-one insists her sister and brother-in-law warned her against having the surgery in February, after suffering complications from their own operations two years ago. “But I was tired of poverty,” Ara said in Kalai district, which has become a hotspot for the racket. “My husband is perennially sick. My daughter’s education became costly. I went to Dhaka to be a maid or garment worker. But the wages were abysmal,” she said, declining to give the name of her broker.

Police, however, tell a different story. They suspect the relatives talked her into going ahead with the operation—part of a growing web in Kalai of donors who turn brokers, taking a commission for anyone they successfully recruit.

“This year alone 40 people from Kalai have sold their kidneys,” said local police chief Sirajul Islam, and 200 villagers since 2005. Another 12 villagers are currently missing, suspected to have traveled across the nearby border to India to hospitals to have the operations.

“Those who have sold kidneys have themselves turned brokers and agents and became part of this huge organ trade network,” Islam said. “These agents first target their families and relatives and then villagers.”

Some eight million Bangladeshis suffer from kidney disease, mostly because of high rates of diabetes, and at least 2,000 need transplants annually. But donation is only legal between living relatives, resulting in a chronic shortage of kidneys for transplant.

A lucrative black market has filled the void, with a steady stream of desperate buyers and equally desperate and poor donors.

After police busted a major scheme in 2011 involving doctors, nurses and clinics, many of the illegal surgeries moved to India. “This racket has a lot of influential people on their pay rolls,” said Mustafizur Rahman, a Bangladesh nephrologist. “They can easily prepare all papers including fake passports and national identity cards in order to facilitate unlawful transplants.”

Unnamed operatives gave Ara a fake passport in Bangladesh and ID card—once blood tests matched her to a recipient. “They changed my name to Nishi Akter so that I could be passed off as his cousin. They said it was needed to convince the Indian clinic where doctors removed my kidney,” Ara said.

Petrified and alone, she was taken across the border for the surgery once she was deemed healthy. “On the day of the operation I was frozen with fear. I prayed to almighty Allah again and again.”

Ara was paid $4,500, which she spent on leasing farmland to grow potatoes and rice. She hired tutors for her 13-year-old daughter who wants to be a doctor. But the money came at a price. She can no longer lift heavy objects, tires easily and often struggles to breathe.

“Selling the kidney was a big mistake. I need costly medicine to stay well,” she said.

Almost every household in Kalai has someone with the telltale, foot-long scar from the operation. Most suffer health problems because of poor post-surgery care, and can no longer labor on the farms. Some instead become brokers, earning up to $3,000 for each villager they sign up, Islam said.

“A donor can easily convince a potential seller that he/she has nothing to lose by selling a kidney,” said Moniruzzaman Monir of Michigan State University, who has done extensive research in Kalai. “He projects himself as a success story,” said Monir, likening the racket in Kalai to a so-called financial “pyramid scheme.”

Last month, police cracked down on the trade, arresting a dozen people in Kalai and Dhaka, including a donor turned “kingpin.”

Authorities were spurred into action after a criminal gang cut out a six-year-old boy’s kidney and dumped his body in a pond.

Police and local authorities have also launched campaigns warning of the dangers, distributing leaflets to homes, schools and madrassas in the area.

But many in Kalai doubt much will change, saying previous efforts have failed, thanks to an inefficient criminal justice system.

Abdus Sattar, one of five arrested in 2011 for allegedly kickstarting the trade, is back in business, according to villagers. “The cases against them are going on at a glacial pace. Unless exemplary punishment is handed down to these kingpins and the trials are fast-tracked, there is no way this trade will stop,” Monir said.

One of Ari’s neighbors, Shukkur Ali, received $5,350 for selling his kidney in neighboring Sri Lanka. But the 21-year-old has been hospitalized three times in the last six months with complications. “I am lucky the buyer of my kidney paid for the treatment. But I know many villagers who got only a pittance. They’re facing a slow death,” he said.