Home Opinion Beneath the Sacred Sands of Sindh

Beneath the Sacred Sands of Sindh 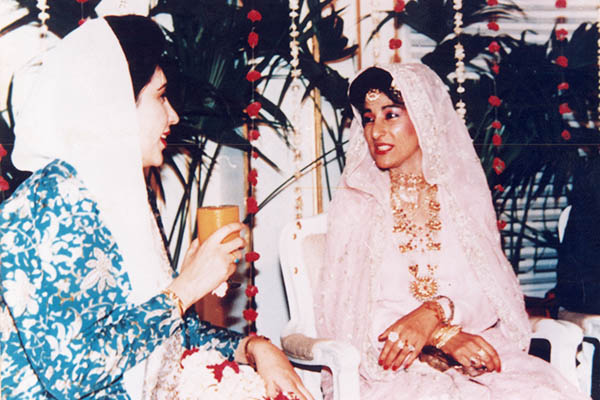 Benazir Bhutto and her mother, Nusrat, stayed with us in Bonn, where my father was posted ambassador. This was in 1973, and it was the first time I met either of them. They had just accompanied Prime Minister Zulfikar Ali Bhutto on his U.S. state visit, and Benazir was soon to join me at Oxford. My parents were old friends of Mr. Bhutto’s—from his student days at Berkeley and Oxford—but I feared these ladies would be perfect prima donnas. They proved me wrong. They were delightful guests, and I still remember how we relaxed while overlooking the Rhine or strolling through the Old Town.

I last met Benazir years ago at the Sindh Club while visiting Pakistan from Hong Kong and introduced my son to her. When she ended her self-exile and arrived in Karachi in October 2007, I couriered her a card saying “Take care!” And I emailed her a message of prayers following the blasts on Oct. 18. I had been looking forward to meeting her again. But that, unfortunately, never happened.

Benazir possessed a surprising spontaneity for one born to fortune, feudalism, and fame. At Oxford, as the daughter of Pakistan’s prime minister, she lived simply but stylishly. She had a ready smile for everyone; tea, cake, and sympathy in her cozy little room at Lady Margaret Hall for those in trouble; and a ride for the exhausted in her snappy little sports car. “I am happy just to sit on the floor and listen to music,” she remarked, sitting on my floor at the time, as was the custom at crowded tea parties in college. Once, she carried my mother’s suitcase across Oxford Station. And she had a wonderful rapport with my father. Like our Oxford contemporary Imran Khan, she never forgot her friends in Pakistan and abroad. We didn’t meet each other often enough the decades in between Oxford and Liaquat Bagh. But when we did, it was as if we had never parted company.

Benazir would have contributed to Pakistan even in her original orientations of law or diplomacy—though she had once observed: “The minute my father is out of office, they’ll throw me out!” Her father, however, had other plans for her. Or perhaps it was her destiny. Justly proud of his eldest, brightest offspring, he propelled her into public life and its consequent addiction by pointing her toward the prized position of president of the Oxford Union and relentlessly monitoring her progress.

Her repartee, like her father’s, was remarkable: Union attendees were awed when she forcefully described political opposition as “vital to rouse the sleeping man in power”; we were amused when she dryly told an M.P.’s son who missed a meeting, “I left the note under your father’s portrait. Shows how much you look at it!” Asked why her pet name was Pinky, she would shoot back, “I was a socialist from the day I was born!” Thus I was not surprised when her mother told me, during her visit to Moscow in 1975, “She wants to enter politics, and is just waiting until she’s 25 so she can stand!”

Career politicians everywhere are ambitious and aggressive, but even her worst enemies could not call her vindictive. Despite her training in the traditions of occidental democracy and her experience leading Pakistan’s largest populist party, Benazir was, most unfortunately, not averse to dynasticism—like all our contemporary leaders of whom we expect no better. To my lasting regret, my intention to raise this matter with her (as I did a similar issue decades earlier) could never be realized.

Nevertheless, her family, and especially she herself, made sustained sacrifices in our epic, collective quest for democracy. Like most oriental politicians she was not served well by her advisors and foreign supporters, who pushed her into peril for their own purposes. I have heard her aspire to “nurturing the tender flower of democracy” sincerely since her youth. This was an ideal she was taught by her father, a more complex persona still.

Perhaps her initial involvement with Pakistani politics was a labor of love as an alter ego for her adored, admired father: an honorable if personalized endeavor. Over a period of 30 years however, including two terms in power, she came full circle and gave her calling and her country precedence over her family—and her life.

So sadly yet awesomely, her commitment and courage have been sanctified by the extraordinary scenes we witness each year at Garhi Khuda Bukhsh and throughout Pakistan, of hundreds of thousands paying homage to this heroine. From a living legend, the youngest, first Muslim woman head of government in the world, an international icon sparkling in her signature green and white, she has passed into the pantheon of slain premiers and presidents and now rests, one prays, peacefully, in the sacred Sufic sands of Sindh.

Hyder is a historian.