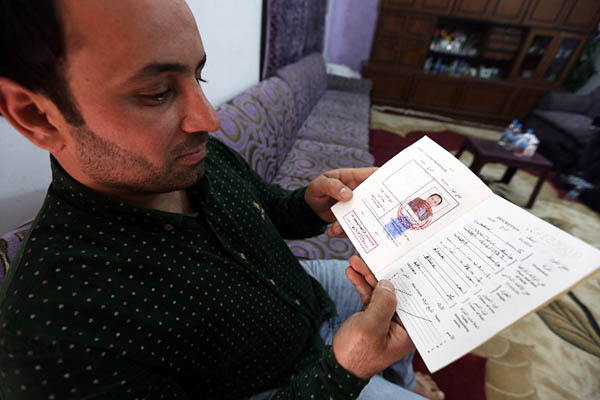 Disappointment, simple homesickness and even the high cost of cigarettes are pushing a growing number of Iraqis to return home after risking everything to reach Europe last year.

Hundreds are coming back every month, most of them with the assistance of the International Organization for Migration. Many are disillusioned and have spent their savings on smugglers, but not all regret attempting the odyssey.

“What’s that film called again? Groundhog Day, right? Every day is the same here,” Murtada Hamid said of Aziziyah, the town where he was born and which he left last year to join the flow of migrants who braved perilous sea crossings to knock on Europe’s doors. “You wake up in the morning, the streets still look a mess, the sewage hasn’t been fixed and there’s no work for anybody,” he said.

The town of about 100,000 people 75 kilometers southeast of Baghdad has hardly any paved roads and is shrouded in a cloud of dust in the summer and bogged in mud in the winter.

Corruption, nepotism and incompetence have ensured that Aziziyah became an example of how years of high oil prices yielded no tangible improvement for many Iraqis. Murtada, a 26-year-old with a dashing smile, ended up in Erlangen, in Bavaria, where he remembers being struck by the architecture, the clean streets and well-groomed public gardens.

The young man, who has now gone back to college, sometimes talks about his time in Germany as one would of a holiday with slightly below-par food and accommodation.

“I had a girlfriend from Bosnia, it was fun for a while, we enjoyed the nightlife,” he recalled. His brother Mustafa was more bitter.

“I spent all my money, the food was just not edible,” said the 29-year-old chemistry graduate. “Everything cost an arm and a leg over there. The cheapest cigarettes were six euros a pack. I had to start smoking rollies,” he said.

Before he left, Mustafa dreamt of language courses and professional training but he has now returned with the feeling he was never welcome in Germany. “It’s a bit scary at night. You’re constantly afraid of being arrested or beaten by these Nazi guys who don’t like refugees,” he said. “We had to move in groups,” said Mustafa, who was based in Cologne, where a New Year’s Eve wave of sexual assaults blamed on foreigners fanned nationwide tensions over the more than one million asylum seekers Germany took in last year.

Some of the Iraqis who left their country in 2015 were fleeing combat zones, persecution or squalid camps but others like Mustafa and Murtada were simply running away from unemployment and boredom.

A study of the migrant flows from Iraq by the International Organization for Migration reveals that “no hope in the future” was the main reason of departure for 80 percent of respondents. The IOM also found that 41 percent of them had university education and 53 percent were unemployed.

The organization helped about 3,500 Iraqi asylum seekers go home last year as part of its “assisted voluntary return program,” and the numbers keep growing. According to IOM spokesperson Sandra Black, returns topped 800 in January and 1,000 in February. They get a plane ticket, sometimes assistance at the airport and onward transportation back to their hometown.

In some cases, the returnees get reintegration assistance funded by the country from which they are returning, and the IOM can also help them start a business.

“It can be someone in car repairs, we had a young man who is a videographer,” Black said. “Whatever the vocation, that person will collect quotes, bring us the paperwork and then we purchase the materials to help them restart their small business,” she said.

Hassan Basy brought no souvenirs back from Nuremberg, where he spent four months waiting for asylum, but said he learned something about himself. His living room in Aziziyah looks like many others in Iraq: purple and gold sofas, a large carpet and a wooden cabinet displaying glass trinkets, plastic flowers, toy pandas and a portrait of Imam Hussein, a key figure in Shia Islam.

“My dream was to get residency, find a job and improve myself,” he said wistfully. “The first month there, everything looked beautiful, I thought I had achieved my dream,” he said. “Eventually, I almost didn’t eat at all for a month and that’s when I started looking how to get home.”

“I understood that whatever I achieved there, I would always be a stranger. At least here I am surrounded by people I know and I can try to build a new life,” he said.

Murtada came to a similar conclusion. “I didn’t put pressure on myself for 100 percent success, I had my doubts. I thought: ‘If I like it, I’ll stay.’ For me it was an adventure,” he said. “It was a very useful experience, I learned how to organize myself, to be disciplined. And it taught me to love my country.”