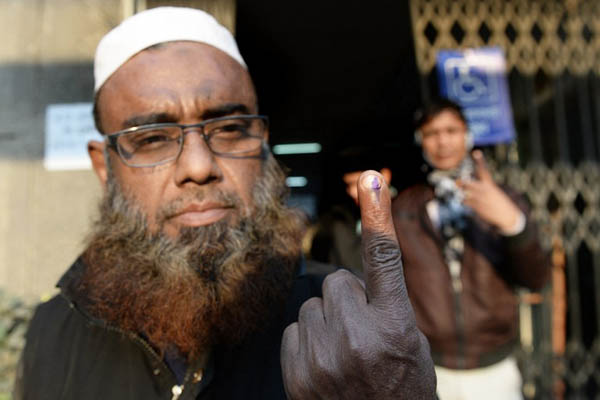 Although the polls have been inaccurate in the past, a loss for Modi would set back his plans to consolidate power in the national parliament to push through promised economic reforms. Victory for Kejriwal would mark a stunning comeback for the anti-graft champion who resigned following a chaotic 49-day spell in charge of the Delhi state government a year ago.

A win would also be particularly sweet for former tax official Kejriwal, who was trounced by Modi when they battled for the same seat in May’s general election. The AAP won only four seats nationally.

A BJP leader refused to throw in the towel on Sunday, saying official results released on Tuesday would show a different story. “The results will defy the exit poll predictions as BJP will emerge victorious and will definitely form the next government,” said Ramesh Bidhuri, general secretary of the BJP’s Delhi party. “[But] if BJP does lose the elections, we cannot say Narendra Modi’s popularity has dwindled or the Modi wave is over,” he added.

India’s Commerce Minister Nirmala Sitharaman was less confident, saying in a statement only that “we are hopeful that we will win.”

Observers say a defeat will be a significant setback for a prime minister who has enjoyed an extended honeymoon with voters since his landslide general election victory. Modi needs to win state elections in coming years to gain control of both houses of the national parliament, where he is attempting to push through reforms on land acquisition, tax and other issues to revive the economy.

His efforts are being frustrated in the upper house where the BJP lacks a majority. States are allocated seats in the nation’s upper house.

Modi headlined several major rallies during the Delhi campaign, portraying his rival as a “backstabber” for quitting so early. He appeared in front-page newspaper advertisements on the eve of the poll to try to win over last-minute voters. BJP heavyweights including Finance Minister Arun Jaitley were also ordered to campaign in the final days.

AAP senior leader Yogendra Yadav said his party was headed for a majority of more than 50 seats in the 70-seat assembly following Saturday’s record voter turnout. “My own sense is that the numbers should be much, much bigger [than the exit poll numbers of around 43],” he told NDTV late on Saturday.

Most pundits had written off Kejriwal after he resigned as chief minister, in part over failed attempts to get an anti-corruption bill passed in the assembly. But after apologizing for leaving voters without an elected government for a year, Kejriwal was the star of the campaign, outshining former policewoman Kiran Bedi who was the BJP’s pick for chief minister.

Kejriwal’s campaign has been based around promises of lower utility bills and free wi-fi for Delhi’s 17 million residents, as well as pledges to counter corruption. Kejriwal famously declared himself an anarchist during his brief tenure last year and staged several street protests outside government offices.