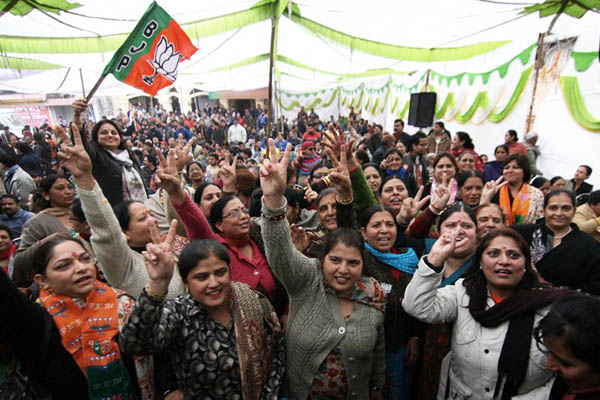 The regional Peoples Democratic Party will join the Hindu nationalist party in ruling the Muslim-majority state.

India’s ruling Hindu nationalist party will for the first time govern the country’s only Muslim-majority state of Kashmir under a power-sharing deal with another party, officials said Tuesday.

After months of negotiations following an election in December, Prime Minister Narendra Modi’s Bharatiya Janata Party (BJP) and the regional rival Peoples Democratic Party (PDP) have agreed to form a coalition government in the state, where rebel groups have been fighting Indian rule since 1989.

BJP president Amit Shah announced the deal after meeting PDP chief Mehbooba Mufti in New Delhi, saying the two parties had resolved most of their differences. “In a few days, Jammu and Kashmir will have a BJP and PDP alliance government,” Shah told reporters. Standing alongside Shah, Mufti said the two parties have formed an agenda “keeping in mind the development and aspirations of the people of Jammu and Kashmir” state. “This alliance is not for power-sharing but it is to win the hearts and minds of the people of Jammu and Kashmir,” she said.

Details of the coalition should be announced in coming days after Modi meets regional political leaders.

The BJP won 25 seats at the elections to Kashmir’s state assembly in December, a feat unthinkable just a year ago. But the Hindu nationalists fell short of a majority, as did the PDP, which took 28. The strong showing was seen as the BJP extending its grip on the country after Modi’s landslide general election victory in May.

Both parties also benefited from widespread public discontent at the state’s then-ruling National Conference party, over its handling of devastating September floods that killed more than 200 people.

The Himalayan region was placed under New Delhi’s direct rule in January after the two parties failed to agree on key and prickly issues. The PDP has long demanded the removal of a draconian law in Indian-administered Kashmir that gives Indian forces sweeping powers to search, enter property and shoot on sight and is seen by critics as a cover for human rights abuses. The BJP has said the law was needed to halt insurgents fighting for the state’s independence or for its merger with Pakistan. The fighting has left tens of thousands of people, mostly civilians, dead.

The PDP has also baulked at the BJP’s longstanding pledge to scrap a constitutional provision known as Article 370, which allows Indian-administered Kashmir to make its own laws.

Critics argue some Muslims and members of other minority religions have come under threat from Hindu nationalist hardliners since the BJP stormed to power at the national level. Modi was accused of failing to curb 2002 anti-Muslim riots that claimed at least 1,000 lives when he was chief minister of Gujarat state, a charge he has always rejected.

This is the first time in occupied Kashmir that bharityya janta party and peoples democratic party is forming collation government .Apparently-it looks very good and compromising decision but the ground realities are different . The Kashmir people are deprived of basic necessities of life , they are facing the awful situation due the Indian army , the united nations is silent on Kashmir issue .Ali Giuliani , a prominent leader of Kashmir said in his latest statement that there is no difference between the two parties and now the coalition government will not do anything for the betterment of kashmiri people . kashmiri people are not hoping any good change , they only need self determination . Recently , in occupied kashmir swine flu has effected many people , but the ignorance of indian government can be noticed ………shameful situation for so called world largest democracy .

@Raazia
Please worry about the minorities in Pakistan. Indian minorities are in far better shape. Don’t believe everything that gets reported in the Pakistani press either, a lot of it is biased news and analysis.