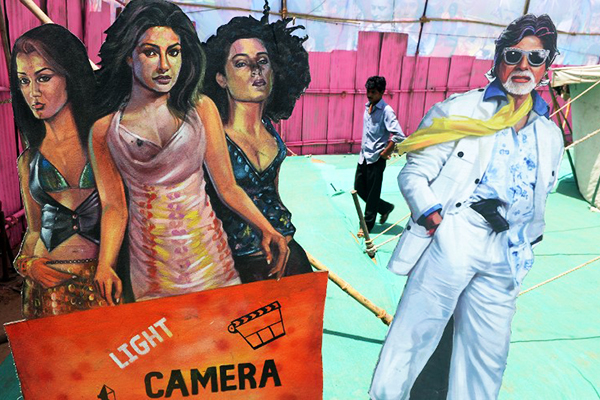 A new film festival in India will showcase for the first time scenes from Bollywood movies deemed too racy for viewers, including the first attempt at an onscreen kiss.

The Cut-Uncut Festival in New Delhi will feature unedited versions of films which fell afoul of the all-powerful Indian censor board, which continues to vet movies before their release. Portrayals of sex, nudity, social unrest, and violence can still be kept out of movie halls under India’s strict laws that were first drafted in 1952 and later amended in 1983.

In the year of Bollywood’s 100-year anniversary, Cut-Uncut is being organized by the Ministry of Information and Broadcasting to demonstrate its more open-minded approach, a ministry official said. “We want to be more liberal, stop enforcing the old rules, and instead recognize artistic endeavor,” said an official speaking on condition of anonymity.

Until recently, “long kissing scenes, nudity, and visuals depicting acts of rebellion against the government” were all censored, he explained. “With changing times, we want to have a fresh approach. Our aim is to change the old set of censor laws soon.”

The festival beginning April 25 will open with a screening of the 1933 classic Karma starring Himanshu Rai and Devika Rani, whose onscreen kiss was considered the first in a Bollywood film and was deleted at the time. A 2004 documentary called The Final Solution, which looks at the sensitive subject of Hindu-Muslim religious rioting, will also be shown after it was banned for being “highly provocative.”

These days Bollywood is awash with sexually suggestive material and scantily-clad leading ladies, but sex remains a taboo, and films showing kissing scenes are given an “adult” certificate limiting them to viewers over 18. The most popular films remain so-called “masala movies,” a mix of violence, romance, and comedy for mainstream audiences, but there are more and more filmmakers working to reproduce the gritty reality of India on celluloid.

Star director Dibakar Banerjee ran into trouble last year with the censor board over his film Shanghai. He had to delete two scenes depicting violence in the political thriller, including a high-caste character murdering a low-caste victim. “I hated the idea of deleting the most powerful scenes from my movie but, well, I had to chop them otherwise the movie would have never seen the light of day,” he said. “Censorship has the power to kill the spirit of a film. It’s high time the government stops dictating what Indians should be watching.”