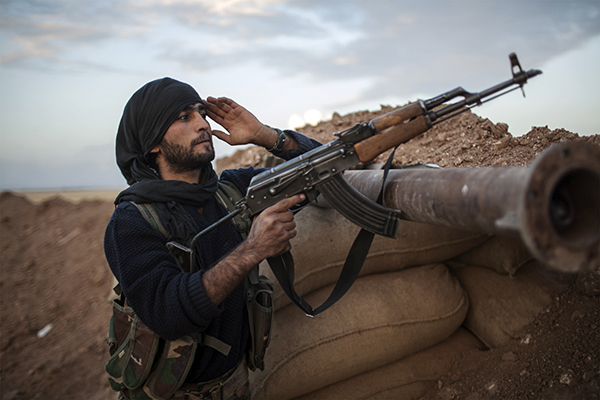 The West worries about jihadists homebound from Syria.

[dropcap]S[/dropcap]ir Andrew Parker, the newly-appointed head of the U.K. Security Services, recently issued a stern warning: jihadist fighters migrating to Syria are a major threat to Britain, Europe, and beyond. “There is good reason to be concerned about Syria,” he said. “A growing proportion of our casework now has some link to Syria, mostly concerning individuals from the U.K. who have travelled to fight there or who aspire to do so.”

As the Syrian civil war nears its fourth year—with over 100,000 civilians dead, and more than 2 million refugees displaced—it has another, fatal and more realistic consequence: more foreign fighters are being indoctrinated to fight for the Sunni cause, opposing the Shia-backed Bashar al-Assad regime. When some of these foreign fighters finally return home, the fear is that they will pose a security threat to their home countries.

Following Afghanistan in the 1980s and Iraq in the 2000s, the Syrian war represents the third-largest foreign mujahideen mobilization ever. The U.S. Federal Bureau of Investigation estimates there are as many as 700 American Muslims fighting in Syria. The total number of fighters— Syrian and foreign, full-time and occasional—is estimated between 60,000 and 100,000, according to news site ProPublica. As more Sunni foreign fighters converge from across the Muslim world to fight Assad’s Shia allies—Hezbollah and Iran—foreign fighters now make up to 10 percent of the rebel front. “The mobilization has been stunningly rapid,” says ProPublica. “What took six years to build in Iraq at the height of the U.S. occupation may have accumulated inside Syria in less than half that time.”

Matthew G. Olsen, director of the U.S. National Counterterrorism Center, told the Aspen Security Forum in July that Syria has become the predominant jihadist battlefield of the world. “There are individuals traveling to Syria, becoming further radicalized, becoming trained, and then returning as part of a global jihadist movement to Western Europe and, potentially, to the United States,” he said. Some social scientists, such as Thomas Hegghammer from the Norwegian Defense Research Establishment, maintain that the number of foreign fighters who turn to terror is small in relation to the numbers who go to fight. “But numbers are not the problem,” argues Robert Danin, from the Council on Foreign Relations. “These fighters go to a place like Syria where they are indoctrinated, exposed to ideology, and then gain expertise. They build networks that they are a part of. I do think this is a tremendous danger.”

It is easy for Syria to become the new land of jihad. Its border with Turkey is porous and hundreds cross overland to join rebel battalions in Aleppo or Idlib. Turkey and Syria are easily accessible from major European airports. The Internet—including seductive Facebook pages and recruiting sites—makes it tantalizing for young Muslim men who want to help the suffering of the Syrian people. Once there, they are vulnerable to the increasingly radical Sunni groups who are flooding northern Syria. And when they return home, the concern is that they have smuggled their newly-learned terror skills into the West and can be expected to use them there.

With Syria on its way to becoming a failed state, there is more chance for it to become a breeding ground for radicals. Danin says it is important to observe who is pouring money into Syria—Saudi Arabia, Qatar, and the Gulf—and to see the large numbers who are genuinely ideologically committed. “You have some people who want to fight Assad,” he said. Some, attracted to the better funded, better equipped radical groups, are ripe for indoctrination. “That makes them more dangerous when they return.”

An important aspect of the lethal mix of motivations and opportunities is that many foreign fighters are Muslims either born or raised in Western countries and who have grown up with an acute sense of alienation. In France, for instance, Muslims are discriminated against in the labor market, in the workplace, in the search for housing, and they are pushed to live on the outskirts of major cities. In these circumstances, fighting in Syria represents not only a chance for young disaffected Muslims to defend their faith, but to elevate their status from angry, dispossessed outsiders to romantic freedom fighters.

In the wake of the failed U.S.-led intervention in Syria last September, opposition fighters, in particular the Free Syrian Army, feel demoralized and abandoned by the West. This leaves a vacuum that is filled by more radical groups: the Islamic State of Syria and Al Nusrah, both of which seek to establish a caliphate. Since November 2001, Al Nusrah Front—an affiliate of Al Qaeda in Iraq—has claimed responsibility for nearly 600 attacks in city centers across Syria, according to the U.S. State Department. AQI has also sent money, people, and material from Iraq to Syria to attack Syrian forces.

“The convergence of Assad and Hezbollah is catnip to Sunni militias who are flying in in unprecedented numbers to fight,” says Andrew Tabler from the Washington Institute for Near East Policy. “This happened in Iraq, but in Syria it is multilayered. There is the historical significance of Syria. And for Europeans, it is easy to reach.”

Last month, Spanish police stormed a hillside ghetto in Ceuta, a Spanish territory in North Africa, where they arrested an extremist Islamist ring charged with sending 50 fighters to Syria. In France, which suffered a series of deadly terrorist attacks in the 1990s, there is also growing concern. French sources say that between 2001 and 2010, 50 jihadists went from France to Afghanistan. In the case of Syria, the number is 135 jihadists—in a single year. The statistics are more troubling in Belgium; between 100 and 300 jihadists have traveled from there to Syria.

What would inspire a Muslim to go to fight in Syria?

‘The convergence of Assad and Hezbollah is catnip to Sunni militias who are flying in in unprecedented numbers to fight.’

For Houssam “Irish Sam” Najjair, it was patriotism. Half Libyan, half Irish—his mother converted to Islam 30 years ago and was one of the first women in Ireland to wear a hijab—the 34-year-old grew up in Ireland as a devout Muslim. “I had a real identity crisis growing up,” he admits. “I identified with being a Muslim, but I was in a Western culture.”

After watching the events of the Arab Spring in 2011 on television and reading radical Facebook pages, Najjair went into a tailspin. “What led me to the frame of mind to buy a one-way ticket to war-torn Libya?” he asked. His epiphany came when he learned foreign mercenaries were raping Libyan women. “The fact that rape was being used as a tool of war made me want to be there, to do something,” Najjair said, from his home in Dublin.

His brother-in-law, Mahdi Harati, had set out for Syria before him and formed the Tripoli Brigade, which went on to topple Gaddafi. Najjair was much in demand for his skills—he spoke Arabic and English, had military experience, and was pragmatic. He arrived in Libya, trained as a sniper and weapons expert, and joined the brigade. After six months of fierce fighting, the Tripoli Brigade entered Tripoli at the end of August 2011. “We were the guys the day Gaddafi fell who were fighting building-to-building to liberate the country,” Najjair said proudly. “We were the guys who did it.”

Once Gaddafi was overthrown, Sam returned to Ireland and began feeling, even more acutely, a sense of cultural displacement. He wrote a book about his Libyan experiences, Soldier for a Summer, and in 2012, at one of the bloodiest flashpoints of the Syrian war, he flew to Turkey, then to Idlib, Syria, to join Harati, setting up a brigade of Libyan fighters who had come to aid their Sunni brothers. “I knew I had something to offer—everything we learned from the Tripoli ordeal,” Najjair said. “We wanted to train the Syrians who did not know how to fight. If I could do that, I could sleep better at night.”

But arriving on the ground in Idlib, Najjair was shocked at the lack of trained soldiers. Many of the men—members of the opposition Free Syrian Army—were doctors, students, and farmers. “They had no experience. They were using old weapons from Iraq, malfunctioning, sabotaged material.” Veterans of the Libyan fighting, who had already toppled a dictator, taught them military maneuvers, procured better arms and offered humanitarian assistance. “We tried to make their weapons usable.” Eventually, Najjair said, it became too dangerous for Libyan fighters to stay inside Syria because of the Mukhabarat, Assad’s vicious secret service. “Things got too hairy,” he said. “The regime was putting the eye on us.”

After four months of airstrikes and ambushes, Najjair fought his way to the Turkish-Syrian border and returned to Ireland. He now watches as the movement becomes increasingly radicalized, and he worries for young men who will join the cause for romantic notions. This is not the Spanish Civil War, he warns. The Free Syrian Army is disintegrating, but while it is still “the people’s army—it is being weakened” by the more fundamentalist groups.

Najjair’s other concern is that many young men, inexperienced in war, get fired up and buy one-way tickets to Syria. They then come up against seasoned Hezbollah fighters, who are aligned with Assad’s government regime. “Hezbollah are strong fighters, used to urban warfare,” he says. “My message to young men wanting to fight in Syria is, ‘Don’t Go! Do not think of going over. The Army does not need manpower. There is a lot of humanitarian work you can do. But fighting is suicide.’ I would not have gone if I did not have experience to give.”

But would he do it again? He thinks carefully, and he remembers the airstrikes, the rusty weapons, the raids, and the strength of the Assad regime’s forces. “I think that we did what we had to; then it was time to go. We fulfilled our mission.”