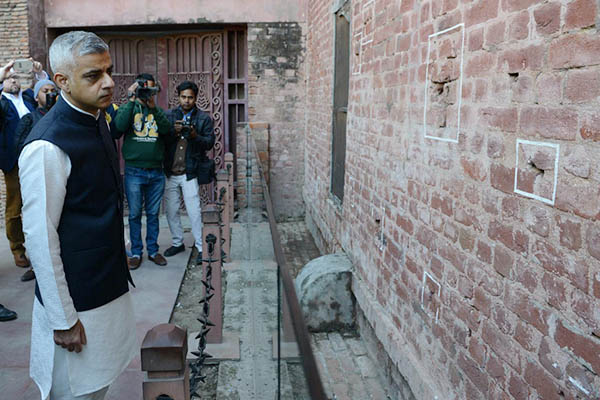 Mayor of London Sadiq Khan looks at bullet marks on a wall during his visit at Jallianwala Bagh in Amritsar in 2017. Narinder Nanu—AFP

The Amritsar massacre, 100 years ago this Saturday in which British troops opened fire on thousands of unarmed protestors, remains one of the darkest hours of British colonial rule in India.

Known in India as the Jallianwala Bagh massacre, it is still an emotive subject with many demanding a British apology—which so far has been unforthcoming.

The number of casualties on April 13, 1919 is unclear, with colonial-era records showing about 400 deaths while Indian figures put the number at closer to 1,000.

In March 1919, the British colonial government passed the Anarchical and Revolutionary Crimes Act, or the Rowlatt Act, extending repressive measures in force during World War I (1914-18). These included incarceration without trial, and caused widespread anger, particularly in the northern Punjab region, with Mahatma Gandhi calling for a nationwide general strike.

In Amritsar, news that prominent Indian leaders had been arrested and banished from that city sparked violent protests on April 10. These saw soldiers fire upon civilians, buildings looted and burned, while angry mobs killed several foreign nationals and attacked a Christian missionary.

Brigadier General Reginald Edward Harry Dyer was tasked with ensuring order, and imposed measures including a ban on public gatherings.

On the afternoon on April 13 some 10,000 people gathered at the Jallianwala Bagh, an area in Amritsar surrounded by high walls with only one exit. People were angry in particular about the arrests of two local leaders. April 13 was also Baisakhi, a harvest festival in northern India.

The crowd included men, women, children and pilgrims who were visiting the nearby Golden Temple, one of the holiest sites in Sikhism. Some estimates put the crowd at 20,000.

Dyer, later dubbed “The Butcher of Amritsar,” reached the spot with dozens of soldiers and sealed off the exit. Without warning, he ordered the soldiers to fire on the unarmed crowd. Many tried to escape by scaling the walls but failed. Some jumped into an open well at the site.

Reportedly the troops fired until they ran out of ammunition, letting off hundreds of rounds into the crowd before withdrawing.

The Indian Express earlier this week shared eyewitness accounts compiled by two historians. They included Mani Ram, whose 13-year-old son Madan Mohan used to play in the square with his friends.

“On the 13th April, 1919 he went there as usual and met his tragic end, having been shot in the head which fractured his skull, he bled and died instantaneously,” he told the newspaper. “I, with eight or nine others, had to search for about half an hour till I could pick up his corpse as it was mixed up with hundreds of dead bodies lying in heaps there.”

Dyer said later that the firing was “not to disperse the meeting but to punish the Indians for disobedience.”

The event marked a nadir in Britain’s occupation of India, and served to boost Indian nationalism and harden support for independence.

Reaction in Britain varied, with Dyer receiving support in the House of Lords and not least from Rudyard Kipling, who is said to have called him “the man who saved India.” Winston Churchill, then secretary of state for war, called the massacre “monstrous.” Prime Minister Herbert Asquith called it “one of the worst outrages in the whole of our history.”

“The crowd was unarmed, except with bludgeons. It was not attacking anybody or anything… [P]inned up in a narrow place considerably smaller than Trafalgar Square,” said Churchill. Dyer was removed from command into enforced retirement. He died in 1927.

Demands by several past Indian leaders and politicians for Britain to apologize for the massacre have fallen on deaf ears. In 1997 the Queen laid a wreath at a site during a tour of India. But her gaffe-prone husband Prince Philip stole the headlines by reportedly saying that the Indian estimates for the death count were “vastly exaggerated.”

In 2013 David Cameron became the first serving British prime minister to visit Jallianwala Bagh. He described the episode as “deeply shameful” but stopped short of a public apology. “We must never forget what happened here. And in remembering we must ensure that the United Kingdom stands up for the right of peaceful protest around the world,” Cameron wrote in the visitors’ book.

He later defended his decision not to say sorry, explaining that the massacre happened 40 years before he was born and saying: “I don’t think the right thing is to reach back into history and to seek out things you can apologize for.”

On Wednesday, Prime Minister Theresa May on Wednesday told parliament that Britain “deeply regretted what happened and the suffering caused.” But she too didn’t say sorry.