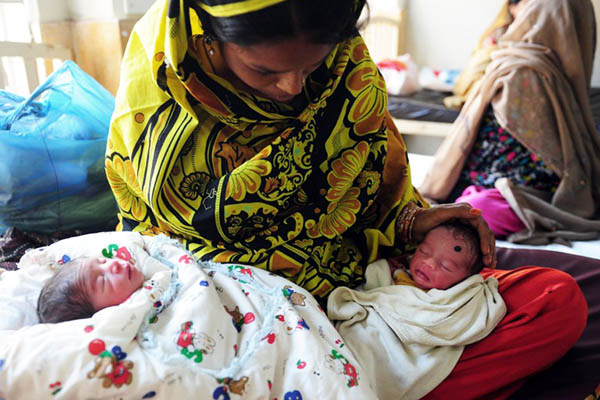 Sixty percent of the 5.9 million children under five who died last year were in just 10 countries in Africa and Asia, an evaluation of global infant health revealed on Friday.

Pneumonia was the leading killer in five of them, all in Africa: Angola, the Democratic Republic of Congo, Ethiopia, Nigeria and Tanzania, said a study published in The Lancet medical journal. In Bangladesh, Indonesia, India and Pakistan, the main cause of death was preterm birth complications—also the global leader—while in China birth defects claimed most of the children who never made their fifth birthday.

“Accelerated investment in child survival is imperative,” to meet the U.N.’s Sustainable Development Goals, the authors wrote. These targets include an under-five mortality rate of no more than 25 per 1,000 births in every country by 2030.

The worst-performing countries today lose more than 90 children under five per 1,000 live births, said the researchers, citing including Angola, Central African Republic, Chad, Mali, Nigeria, Sierra Leone and Somalia. The team recommended “the uptake of breastfeeding, providing vaccines for pneumonia, malaria and diarrhea, and improving water and sanitation,” to prevent child deaths in the worst afflicted nations of the world.

In countries with low death rates such as the United States and Russia with fewer than 10 per 1,000 births, the causes were very different—mainly birth defects, complications from preterm delivery, and injuries such as stove burns, car accidents or drowning. The study said nearly half—2.7 million—of the 5.9 million children lost last year died within their first 28 days.

The research was funded by the U.N.’s World Health Organization and the Bill & Melinda Gates philanthropic organization.

Globally, four million fewer under-five children died in 2015 than in 2000, the researchers found. This represented a 53-percent decline—short of the two thirds reduction target for 1990-2015 set in the Millennium Development Goals, which preceded the SDGs.

The slowest progress, said the new study, was in reducing newborn deaths. “Child survival has improved substantially since the Millennium Development Goals were set,” the study’s lead author Li Liu of the Johns Hopkins Bloomberg School of Public Health said. “The problem is that this progress is uneven across all countries, meaning a high child death rate persists in many countries.”

In a comment on the study, also published by The Lancet, Peter Byass of the Umea Center for Global Research in Sweden said it was an indictment that researchers had to rely on estimates and not real, recorded numbers. Only a small proportion of under-five deaths are properly documented, especially in poor countries.

“Despite the global information revolution—resulting in a single modern 256 GB laptop having enough capacity to hold a 250-character record on each of the 670 million under-five children in the world, with space left over for full details of each of the six million annual under-five deaths—such data are simply neither collected nor available,” he wrote. “That six million under-five children continue to die every year in our 21st century world is unacceptable, but even worse is that we seem collectively unable to count, and hence be accountable for, most of those individual deaths.”