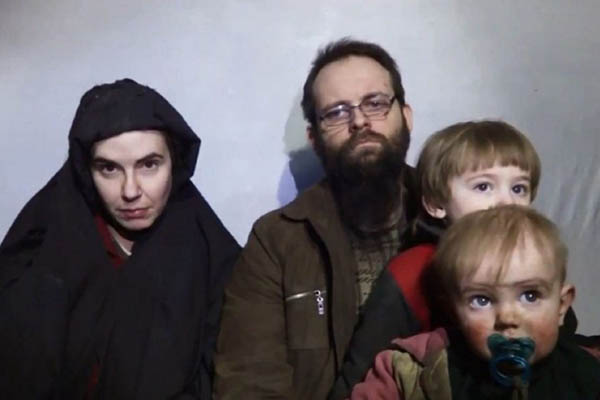 U.S. mom was sexually assaulted, violently attacked during her five years in captivity

A U.S. mother held hostage by Taliban-linked militants for five years has detailed the violence and sexual assault she endured in captivity, and said her young son was also beaten.

“This was an intolerable situation for a child to be in,” Caitlan Coleman Boyle, 31, told ABC News in a television interview broadcast on Monday.

Boyle gave birth to three children in captivity. She and her Canadian husband were abducted by the Haqqani Network while traveling through a remote area of Afghanistan—for reasons that remain unclear—in 2012.

The family was released last month in Pakistan in circumstances that are also unclear, and are now trying to rebuild their lives in Canada. Pakistan’s military has said it rescued the family while some U.S. and Canadian officials have reportedly described their release as a “negotiated handover.”

Boyle said their guards “could be very violent, even sometimes with the children,” assaulting their now four-year-old son with a stick, and hitting her and her husband.

“I would get beaten or hit or thrown on the ground,” she told ABC News. She broke a cheekbone and three fingers while intervening to protect the children, her husband, Joshua Boyle, 34, told ABC.

They made toys out of bottle caps and bits of cardboard, and fearing the family could be beheaded, they made up a game based on England’s Charles I, who was executed in 1649, and Oliver Cromwell, she said. “Obviously with people like this, the idea of a beheading is always on the table, so he certainly knew that this type of thing could happen to his family but then we would come up with games to make it not seem so scary,” she said. “He had great fun pretending to be Oliver Cromwell and chasing Charles I around and trying to behead him,” she said. “We made it a game so that he wasn’t afraid.”

After the family returned to Canada last month, Boyle, 34, accused his kidnappers of murdering an infant daughter through a “forced abortion” and of raping his wife. “They came into the cell, and they took my husband out forcefully, dragging him out, and one of the guards threw me down on the ground, hitting me and shouting ‘I will kill you, I will kill you’” his wife told ABC News. “And that’s when the assault happened. It was with two men. And then there was a third at the door. And afterwards, the animals wouldn’t even give me back my clothes.”