‘Call Me by Your Name’ Tops Spirit Awards Nominations 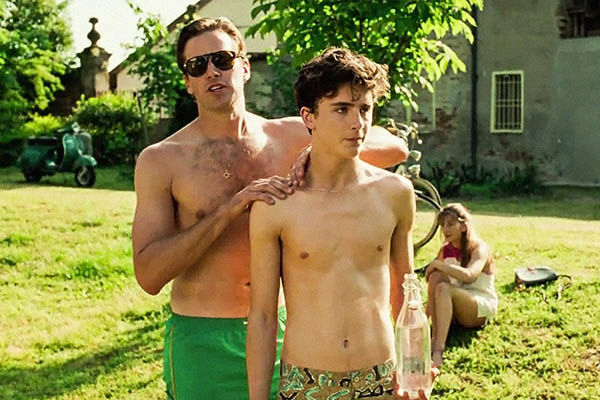 Independent film awards also give nods to ‘Get Out’, ‘Good Time’, ‘Lady Bird’, and ‘The Rider’

Coming-of-age tale Call Me by Your Name led the pack of independent films tipped for Oscars glory as the Film Independent Spirit Awards nominations were announced on Tuesday.

Set in 1980s Italy and starring Timothee Chalamet and Armie Hammer, it tells the story of 17-year-old Elio as he begins a relationship with his father’s American research assistant, Oliver. The film was nominated in six categories, including best feature, best director for Luca Guadagnino and best lead and supporting male for Chalamet and Hammer, respectively.

Breakout horror satire Get Out, written and directed by debutant filmmaker Jordan Peele and starring Daniel Kaluuya and Allison Williams, secured five nominations, including best screenplay and directing for Peele and male lead for Kaluuya. Josh and Benny Safdie’s heist thriller Good Time tied in second place with nods for directing, editing and three actors, including for its star Robert Pattinson.

Twilight actor Pattinson, 31, earned the best reviews of his career for his portrayal of a New York bank robber, shedding his heartthrob looks in favor of a shaggy bleach-blond mane and a torso full of tattoos.

Greta Gerwig’s comedy Lady Bird and Chloe Zhao’s The Rider, which picked up the Art Cinema Award at Cannes, each earned four nods.

The nominations were announced on Tuesday morning by actresses Lily Collins, and Tessa Thompson, and Film Independent chief Josh Welsh at the plush Jeremy Hotel in West Hollywood. “There’s an excitement particularly because Film Independent acknowledges people that are just starting out for their first features,” Thompson, who won acclaim for her recent performance in Thor: Ragnarok and for 2015’s Creed, told AFP. “There’s a hopefulness, there’s something sort of—and I mean this in the best sense of the word—renegade about it, surprising about it.”

Asked if she thought Hollywood had improved on gender equality since the last awards season, Thompson highlighted the “incredible importance” of getting more women to direct and write movies. “I’ve had a fantastic year. I’ve gotten to play an incredible superhero and I’ve gotten to celebrate from afar people like Gal [Gadot] who had the incredible success of Wonder Woman,” the 34-year-old star told AFP. “We’re getting there but I think we have to have women in all realms, not just in front of the camera. That’s the thing I really feel eager about us accomplishing in the next couple of years.”

Collins, 28, picked out The Florida Project, which was nominated for best feature and director, among her favorite Spirit Awards contenders, and said she was excited for Hammer, her co-star in the 2012 Snow White movie Mirror Mirror.

She told AFP she saw the ceremony, which takes place on the beach in Santa Monica, California, as “totally more chill” than other awards season landmarks such as the Oscars and Golden Globes. “There’s just a very positive vibe that goes into this event. Everyone’s there to celebrate smaller films and create larger conversations out of that subject matter.”

The Spirit Awards are seen as a strong indicator of independent movies that could be winners on Oscars night. Five of the last six best feature winners have gone on to best picture glory at the Academy Awards, including Moonlight, Spotlight and Birdman. “We’re looking at lower budgeted films but it’s also films that have original, provocative subject matter and uniqueness of vision,” Welsh told AFP.

He described this year’s nominees as “incredibly strong,” singling out Get Out, The Rider and The Florida Project.

The winners will be announced on March 3, 2018—a day before the Academy Awards.