Car Bombing Near Afghan Military Base 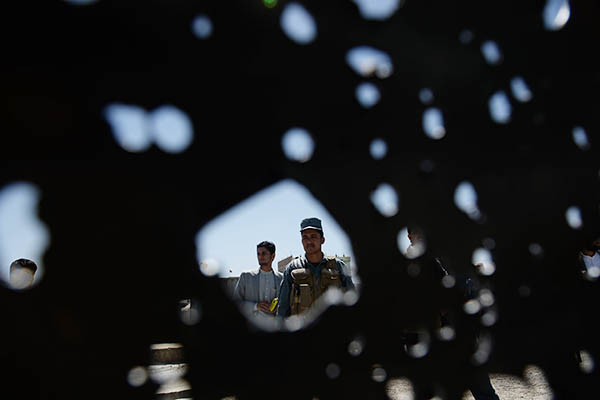 At least 18 civilians were killed and six wounded on Sunday in a suicide car bombing near a military base in Afghanistan’s Khost province, where Afghan and foreign soldiers are stationed, authorities said.

The bomber detonated the explosives at a military roadblock near the entrance to Camp Chapman as people were rushing to get home for iftar, said Faizullah Ghairat, the Khost city police chief.

There was no immediate claim of responsibility, but the Taliban, which last week held their first face-to-face peace talks with the Afghan government, have often targeted Afghan and foreign troops.

The insurgents launched a countrywide offensive in late April, stepping up attacks on government and foreign targets despite the nascent peace talks in what is expected to be the bloodiest fighting season in a decade. However it is ordinary Afghans who are paying the price, the U.N. mission in the country has said, with almost 1,000 civilians killed during the first four months of this year, a sharp jump from the same period last year.

“We counted 18 dead and six wounded,” said a doctor at a hospital in Khost city Sunday. Ghairat put the toll at 25 dead and 16 wounded, adding that they were all civilians.

Foreign troops including U.S. soldiers are stationed at Camp Chapman alongside Afghan soldiers. A statement from the NATO mission in Afghanistan said it was “aware” of the blast, but did not elaborate.

In 2009, Camp Chapman was the target of a spectacular suicide attack claimed by Al Qaeda. Seven CIA American officials were killed in the deadliest assault on the U.S. agency since 1983, when eight officers died in an attack on a military base in Beirut.

In 2010, 24 Taliban militants, some wearing U.S. uniforms, were killed when they tried to storm Camp Chapman and another nearby U.S. base, Camp Salerno. The base was hit again by a suicide car bomb in 2012 that killed three Afghans in a blast powerful enough to rattle windows four kilometers away.

Camp Chapman is located less than four kilometers from the city of Khost, which is near the Pakistani border, a volatile region where the Taliban but also a multitude of armed Islamist groups hold sway.

Earlier Sunday, officials said at least two civilians had been killed in a roadside bomb blast, blaming the attack on the Taliban. Four other Afghans and two police were wounded when a police vehicle hit the roadside bomb in Kunduz city on Sunday, provincial police spokesman Sayed Sarwar Husseini told AFP.

Roadside bombs have been the Taliban’s weapon of choice in their war against foreign and Afghan security forces, now in its 14th year. The bombs also increasingly kill and wound civilians.

The Taliban, who promised to “safeguard” civilian lives during their offensive, are known to distance themselves from attacks that result in high civilian casualties.

Last week, Afghan and Taliban negotiators held their first face-to-face talks in Pakistan, where the Taliban demanded the removal of all foreign troops from Afghanistan, among other things. Afghan negotiators said Thursday their next round of talks with the Taliban would focus in detail on ways to end bloodshed in the country, wracked by nearly 40 years of war.

NATO ended its combat mission in Afghanistan in December, leaving local forces to battle the Taliban alone, but a residual force remains for training and counter-terrorism operations.