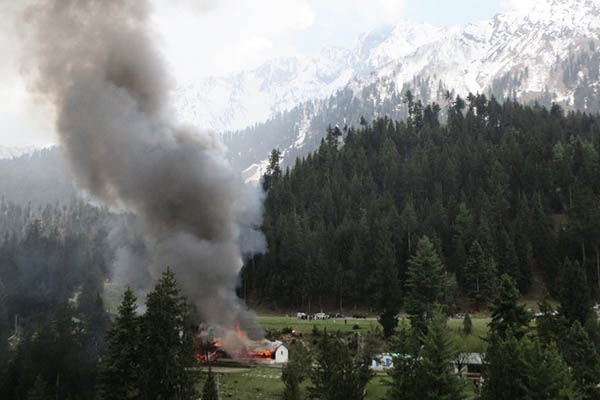 A military helicopter crashed into a school in the Naltar region on Friday, killing seven people including the Norwegian and Philippine ambassadors, and setting the building ablaze, the Pakistan Army said as officials warned that casualties could rise.

The helicopter was one of three carrying a delegation of envoys to inspect projects on a three-day trip to the Gilgit-Baltistan territory where they were set to meet with Prime Minister Nawaz Sharif. The Ministry of Defense said it was investigating what caused the crash. Officials also clarified the school was shut at the time.

Leif H. Larsen, the Norwegian envoy, and Domingo D. Lucenario Jr. of the Philippines were killed along with the wives of the Malaysian and Indonesian ambassadors, as well as the helicopter’s two pilots and a third crewmember, according to official tweets by the Army. Polish ambassador Andrzej Ananiczolish and Dutch ambassador Marcel de Vink were also injured, the Army added. Media reports have identified the two deceased pilots as Major Altamash and Major Faisal.

The convoy of three helicopters was carrying a delegation of foreign diplomats and their aides to Pakistan’s Gilgit-Baltistan territory. “It was a diplomatic trip with members of 37 countries in total,” said a passenger in one of the helicopters, who requested anonymity, adding that the school had caught fire after the crash. “We have been told to send in as many ambulances as we can because the situation there is ‘urgent’,” said a senior official.

Prime Minister Sharif “expressed deep grief and sorrow” over the incident according to a statement issued by his office, which added that he had been on his way to the region but his plane returned to Islamabad after hearing the news. According to a list of passengers obtained by AFP, the ambassadors of Indonesia, Lebanon, Malaysia, the Netherlands, Romania, Norway, South Africa, the Philippines and Poland were scheduled to fly on the helicopter.

The injured were being air lifted to a military hospital in Gilgit, the region’s administrative capital, added another senior local police official.

In the city of Gilgit, a hospital official said injured were being carried on stretchers to the emergency ward of the Combined Military Hospital.

The Tehreek-e-Taliban Pakistan claimed it had shot down the aircraft in an attempt to target P.M. Sharif. “A special group of Tehreek-e-Taliban Pakistan had prepared a special plan to target Nawaz Sharif during his visit but he survived because he was traveling in another helicopter,” militant spokesman Muhammad Khorasani said in an emailed statement.

Dismissing these claims, the Army spokesman told Dawn News the helicopter had crashed because of a technical fault. He reiterated that the crash was an accident in a tweet: “Accident cause-As per initial info,2 heli landed safely while 3rd developed tech fault while landing.” Gilgit-Baltistan, where the chopper came down, is not known as a stronghold of the militant organization, raising further questions about the veracity of the claim.

Maj. Gen. Bajwa has also said that, per procedure, a board of inquiry has been constituted to investigate the crash.