Celebrating Joshi With the Kalash 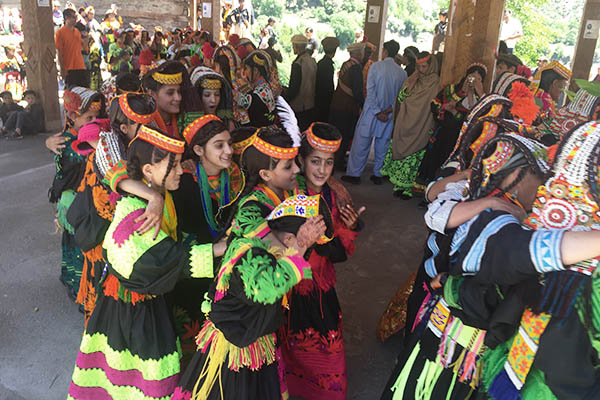 The annual three-day festival kicks off amid stringent security in scenic Chitral.

The three-day Kalash spring festival, Chilam Joshi, launched with usual fervor in the Bumboret Valley on May 13, and was attended by tourists from across Pakistan and abroad despite persistent security threats.

Old and young, men and women, everyone comes together during the festival to thank Goshidai, who is said to watch over the herds and crops during the summer. The first day of Joshi is also known as ‘Milk Day,’ and groups of singing and dancing Kalash go house-to-house, where they are offered libations of milk that has been saved for 10 days before the festival.

Men and women alike celebrate the occasion by wearing elaborate clothing embellished with bird feathers, cowry shells, ornaments and sparkling beads. One of the singing Kalash women, 25-year-old Shazia, was wearing a lavish dress that she says she made with her own hands. “We started preparing [for this festival] three months ago,” she says. “We don’t have to wear these elaborate, traditional dresses to mark the occasion, but this is our culture and we all want to maintain our identity,” she added, noting that the dress had set her back Rs. 20,000. Fellow reveler Fakhar Azam, 55, said the songs, some dating back centuries, were a part of them. “We sing about the glorious time of the Kalash tribe, when we ruled this entire region,” he says wistfully, referring to the belief that the Kalash are descendants of Greek king Alexander the Great. “We pray to Goshidai, and sing for the departed souls of our loved one,” he added.

The Kalash people live in three valleys across the Chitral region, and, according to the Pakistan Bureau of Statistics, are divided nearly equally between adherents of Islam and their own religion. While the Kalash religion is primarily polytheist, based around the worship of 12 gods and goddesses, most Kalash say they are monotheistic and follow Dezau, while the remaining “gods” are merely his messengers. The community marks four major festivals dedicated to their religion—Chilam Joshi in the spring, Uchal during wheat and barley harvest season, Phoo during grape and walnut harvest season, and Chaumos in the winter.

The Joshi festival usually takes place mid-May and ends with the imbibing of locally brewed mulberry wine. The event is always peaceful and attracts visitors from all over, but a recent wave of attacks on minorities in Pakistan has prompted the government to leave nothing to chance.

Security forces have been deployed along all roads leading to the Kalash Valley. All visitors are required to register themselves at multiple checkpoints to ensure no militant attempts to infiltrate the gathering. “Foolproof security has been provided for the festival,” said Deputy Superintendent of Chitral Police Tariq Karim. “It is good that so many people, including foreigners, are visiting,” he added, noting that foreign tourists were being ensured extra security. However, he noted that Chitral was one of the most peaceful regions of Pakistan and the security was merely a necessary precaution.

But the restrictive atmosphere does not sit well with many of those attending the event. “There has been a lot of security this year, which is a shame,” said Tim Thompson, a British national who is attending the Chilam Joshi festival for the eighth time. “There shouldn’t be too many military or police officials,” he added. Shazia, too, believes the excessive security is not needed. “We should have some security, but the current setup is just creating problems for us,” she said. “You can see security forces personnel in practically every nook and cranny and that makes us uncomfortable,” she added.

But while security is a larger concern for the region, especially in light of unsubstantiated Taliban claims of expansion into Gilgit-Baltistan, the biggest concern among the Kalash themselves is that of religious converts. The Kalash is one of the world’s most endangered communities, with government reports claiming their population has deceased from 10,000 in 1951 to around 3,500 today. “No one is prevented from exercising their freedoms, including the right to convert,” says Shahzada, a 25-year-old Kalash resident. “But sometimes people from the Tableeghi Jamaat [an evangelical Muslim organization] visit us and some people are converted by their preaching,” he added. Some people are also converted due to dwindling finances and offers of cash for abandoning their religion. “Our rituals can prove to be quite expensive. I was also advised to convert for money, but I cannot deny my identity,” he said.

“Indigenous populations across the world are shrinking [due to advances in technology and access],” said the British Thompson. “I hope they can combat the trend, but the world is changing very quickly. Even two years ago, barely any Kalash I met had cellphones. But now electricity, television, and cellphones are all easily available,” he added.

Akiko Wada, a Japanese woman who came to the Kalash Valley in 1987 and was so inspired by their lives that she decided to live here permanently, says the rate of conversion has slowed in recent years. “This is a very unique culture. The place and people are close to nature. Sometimes Muslims visit and offer to pay anyone interested in converting, which is tragic,” she says. “But no one complains if someone converts because they are unhappy and no longer want to live here,” she added, praising the locals’ liberal ethos.