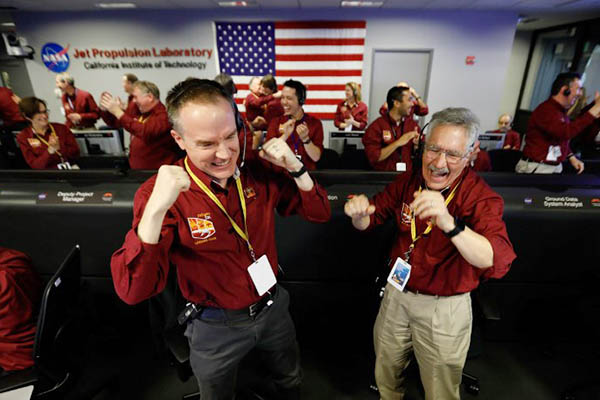 Cheers and applause erupted at NASA’s Jet Propulsion Laboratory on Monday as a waist-high unmanned lander, called InSight, touched down on Mars, capping a nearly seven-year journey from design to launch to landing.

The dramatic arrival of the $993 million spacecraft—designed to listen for quakes and tremors as a way to unveil the Red Planet’s inner mysteries, how it formed billions of years ago and, by extension, how other rocky planets like Earth took shape—marked the eighth successful landing on Mars in NASA’s history.

“Touchdown confirmed,” a mission control operator at NASA said, as pent-up anxiety and excitement surged through the room, and dozens of scientists leapt from their seats to embrace each other. “It was intense and you could feel the emotion,” said NASA administrator Jim Bridenstine, in an interview on NASA television afterward.

Bridenstine also said President Donald Trump and Vice President Mike Pence had watched on television and called to congratulate the U.S. space agency for its hard work. “Ultimately, the day is coming when we land humans on Mars,” Bridenstine said, adding that the goal is to do so by the mid 2030s.

The vehicle appeared to be in good shape, according to the first communications received from the Martian surface. But as expected, the dust kicked up during the landing obscured the first picture InSight sent back, which was heavily flecked.

France’s Centre National d’Etudes Spatiales (CNES) made the Seismic Experiment for Interior Structure (SEIS) instrument, the key element for sensing quakes. The principal investigator on the French seismometer, Philippe Lognonne, said he was “relieved and very happy” at the outcome.

“I’ve just received confirmation that there are no rocks in front of the lander,” he told AFP. And in a final crucial phase, NASA said InSight signaled to Earth that its solar panels—twin solar arrays spanning seven feet in width—had opened and were collecting sunlight on the surface of Mars.

“The InSight team can rest a little easier tonight now that we know the spacecraft solar arrays are deployed and recharging the batteries,” said Tom Hoffman, InSight’s project manager.

The spacecraft is NASA’s first to touch down on Earth’s neighboring planet since the Curiosity rover arrived in 2012.

More than half of 43 attempts to reach Mars with rovers, orbiters and probes by space agencies from around the world have failed. NASA is the only space agency to have made it, and is invested in these robotic missions as a way to prepare for the first Mars-bound human explorers in the 2030s.

The nail-biting entry, descent and landing phase began at 11:47 a.m. at NASA’s Jet Propulsion Laboratory in Pasadena, California, home to mission control for Mars InSight, and ended one second before 1953 GMT.

A carefully orchestrated sequence—already fully preprogrammed on board the spacecraft—unfolded over the following several minutes, coined “six and a half minutes of terror.”

Speeding faster than a bullet at 12,300 miles an hour, the heat-shielded spacecraft encountered scorching friction as it entered the Mars atmosphere.

The heat shield soared to a temperature of 2,700 Fahrenheit before it was discarded, the three landing legs deployed and the parachute popped out, easing InSight down to the Martian surface.

France’s CNES made the SEIS instrument, while the German Aerospace Center (DLR) provided a self-hammering mole that can burrow 16 feet into the surface—farther than any instrument before—to measure heat flow.

Spain’s Centro de Astrobiologia made the spacecraft’s wind sensors, and three of InSight’s seismic instruments were designed and built in Britain.

Other significant contributions came from the Space Research Center of the Polish Academy of Sciences and Astronika and the Swiss Institute of Technology.

“It is wonderful news that the InSight spacecraft has landed safely on Mars,” said Sue Horne, head of space exploration at the U.K. Space Agency.

Together, the instruments will study geological processes, said Bruce Banerdt, InSight’s principal investigator at the Jet Propulsion Laboratory. By listening for tremors on Mars, whether from quakes or meteor impacts or even volcanic activity, scientists can learn more about its interior and reveal how the planet formed. The goal is to map the inside of Mars in three dimensions, “so we understand the inside of Mars as well as we have come to understand the outside of Mars,” Banerdt told reporters.