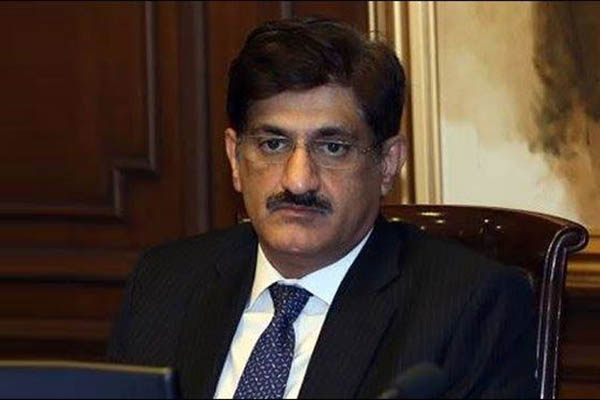 Sindh’s chief minister says he has written to P.M. Khan seeking permission to directly import coronavirus vaccines for his province

Sindh Chief Minister Murad Ali Shah on Monday dismissed a widely reported spat with Maritime Affairs Minister Ali Zaidi, saying that he was elected by the Sindh Assembly and was answerable only to them, not the prime minister or any federal minister.

“According to the Constitution, I am answerable to the Sindh Provincial Assembly and to no one else, not [even] to the prime minister,” he said while addressing the inauguration of the Biopharmaceutical Manufacturing Facility and Dow Institute of Life Sciences at the Ojha campus of Dow University of Health Sciences in Karachi.

The statement follows a verbal confrontation between Shah and Zaidi during a session of the Karachi Transformation Committee last week, details of which were made public by the federal minister on Saturday. According to PTI’s Zaidi, Shah thrice told him he was “not answerable” to him. The Sindh chief minister also sent a letter to the prime minister calling Zaidi “unruly” and seeking his intervention over the exchange. Claiming Shah showed “arrogance,” Zaidi released his own response, also addressed to the prime minister.

In his speech, Shah said he did not want to comment further on his exchange with Zaidi, as it was a “confidential issue” that should not have been made public. “I cannot be that irresponsible that I talk about a letter which I had written confidentially,” he said, telling journalists that the matter would be raised with the prime minister directly rather than having it play out on the media.

Zaidi, meanwhile, responded to Shah’s speech on Twitter, claiming it was “ludicrous” that for the Sindh chief minister “the office of the honorable P.M. has no value. He says he’s not answerable to the P.M.!”

Referring to the Sindh health minister’s demand for the federal government to allow provincial governments to procure COVID-19 vaccines independently for speedy distribution, Shah said he had already written a letter to the prime minister for formal approval. The Sindh government has also contacted China-owned Sinopharm for its vaccine, he said, but noted that as it was state-owned, it only dealt with direct requests from the federal government.

He stressed that he was hopeful the prime minister would grant permission swiftly, adding that the government had already identified districts to be prioritized for vaccinations. “Now all we need is the vaccine so we can start work,” he added.

The chief minister also noted that the Hyderabad Electric Supply Company and Sukkur Electric Power Company were running in heavy losses. “I had written a letter to the prime minister much earlier and had requested him to hand over both the companies to the Sindh government on the condition to continue the subsidy, whatever the federal government was giving to them,” he said, adding that the subsidies were require for five more years to ensure the effectiveness of both companies.

Shah claimed a Chinese government company was in contact with the Sindh government to run both HESCO and SEPCO in partnership with the provincial administration.