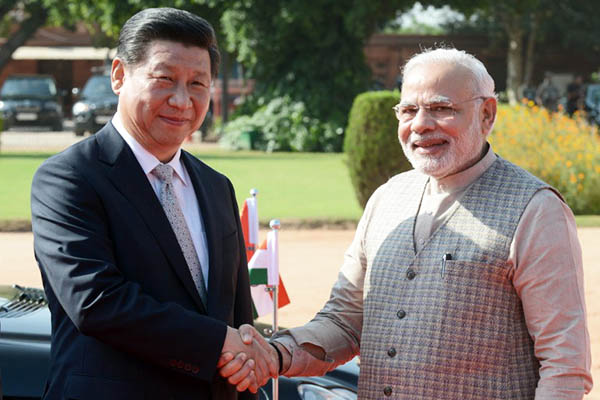 China’s President Xi Jinping will hold talks with Indian leaders in New Delhi on Thursday during a rare visit likely to yield a sharp rise in investment as Beijing seeks to reset ties with its western neighbor.

Indian Prime Minister Narendra Modi has rolled out the red carpet for Xi, hosting the Chinese leader at a private dinner in a luxury riverside tent in his home city Ahmedabad on Wednesday. Modi is eager to secure Chinese funding to fulfill his election pledge to overhaul India’s crumbling infrastructure, which experts say has held back much-needed economic growth in the country of 1.3 billion people.

Despite his hardline nationalist reputation, Modi moved quickly to engage with China after taking office in May, swiftly extending an invitation to Xi. He has also spoken of his admiration for China’s economic success.

China, meanwhile, is keen to foster warmer ties with its western neighbor at a time of heightened tensions with Japan and several Southeast Asian nations over disputed sea territory. But while the two sides have been at pains to stress cooperation ahead of the visit, much remains that divides them.

Modi said during his election campaign that China would have to shed what he called its “expansionist mindset,” tapping into popular sentiment in India.

The neighbors, now nuclear-armed, fought a brief but bloody war in 1962 over the Indian state of Arunachal Pradesh in the eastern Himalayas, and are still embroiled in a bitter dispute over the territory. Only last April India accused Chinese troops of intruding deep into Indian-held territory, sparking a three-week standoff that was resolved when troops from both sides pulled back. The border issue is on the agenda for Xi’s visit, which coincides with Indian media reports of further Chinese incursions over the de-facto boundary.

China’s close ties with Pakistan and growing influence in India’s backyard are another source of tension.

Xi, the first Chinese president to visit India since 2006, arrived from the Maldives and Sri Lanka, where he announced large-scale investment and sought to boost ties in the politically sensitive area of defense. Despite repeated denials from Colombo and Beijing, some in New Delhi still fear China’s growing engagement in the region is a deliberate strategy to encircle India.

The presence in India of the Dalai Lama, Tibet’s exiled spiritual leader, is another source of tension between the two countries. Police in New Delhi detained around 10 Tibetan protesters outside the Chinese embassy on Wednesday morning.

But Xi was at pains to emphasize the positive, writing in an article published in Indian daily The Hindu ahead of his arrival that “China-India relations have become one of the most dynamic and promising bilateral relations in the 21st century.” He pledged greater investment from China, already India’s biggest trading partner, with annual two-way commerce of more than $65 billion.

India has been pushing for more investment to narrow the trade deficit with China, which has soared to more than $40 billion from just $1 billion in 2001-02. China, which built the world’s largest high-speed rail system from scratch in less than a decade, is keen to secure business for its state industries as India overhauls its infrastructure.

On Wednesday it agreed to build an industrial park in the Indian state of Gujarat, where Modi served as chief minister before taking over as prime minister.