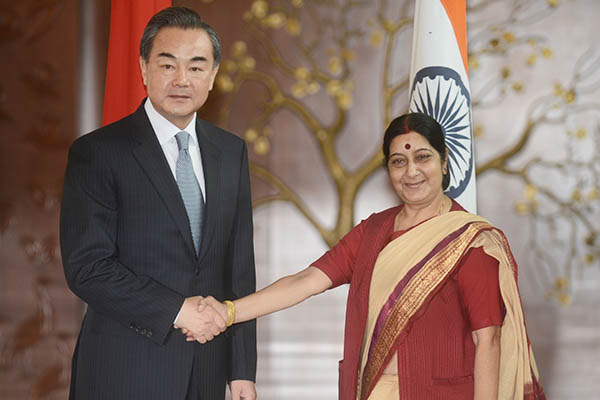 Talks expected to focus on strengthening economic ties rather than long-running border dispute.

Wang Yi said his two-day visit to the capital, as a special envoy of Chinese President Xi Jinping, was to “cement our existing friendship and explore further cooperation.”

“China is ready to work with our Indian friends for an even brighter future of our strategic and cooperative partnership,” Wang said in an interview with The Hindu newspaper.

Despite his hardline nationalist reputation, Modi has been making overtures to traditional rivals China and Pakistan since his Bharatiya Janata Party (BJP) swept to power last month. The new Indian leader has invited Xi to visit, and Wang told the newspaper that the president has agreed to come later this year.

Wang, who arrived early Sunday, shook hands with India’s new Foreign Minister Sushma Swaraj and smiled and waved to media on the steps of government offices before heading inside. The talks are expected to focus on strengthening economic ties rather than detailed discussions on a border dispute between the nuclear-armed neighbors that has soured ties for decades.

Wang is coming “to engage with our leadership and we will take it from there,” India’s foreign ministry spokesman Syed Akbaruddin told a news briefing last week.

Wang is expected on Monday to call on Modi, who vaulted to power on a promise of reforming and reviving the slumping economy. Modi, a frequent visitor to China before he became premier to seek investment for his home state of Gujarat, has pledged increased foreign investment to help kickstart the economy. Foreign policy expert Ranjit Gupta said the visit was a “good augury.”

“China has gone all out to woo the new Indian government, which is a great gesture,” Gupta, a member of the Indian Security Advisory Council of the U.S.-India Institute, a Washington-based think-tank, said.

China is India’s biggest trading partner with two-way commerce totaling close to $70 billion. But India’s trade deficit with China has soared to over $40 billion from just $1 billion in 2001-02, Indian figures show. Experts say Modi must bridge the deficit by seeking greater access to the Chinese market, with the two sides targeting annual bilateral trade of $100 billion by 2015.

Relations however are still dogged by mutual suspicion—a legacy of a brief, bloody border war in 1962 over the Indian northeastern state of Arunachal Pradesh, which China claims as its own. A flare-up along their disputed border last year under the previous Indian government heightened tensions between the world’s two most populous countries.

Modi warned China to shed its “expansionist mindset” at an election rally earlier this year. China hit back, saying it “never waged a war of aggression to occupy any inch of land of other countries.”

Wang acknowledged the border tensions, but said the two countries have “much more strategic consensus than differences and cooperation is our top priority.”

“The boundary question is indeed a difficult one, but with strong will and resolve, we will eventually find a solution,” he told The Hindu.

India last April accused Chinese troops of intruding nearly 20 kilometers into Indian-claimed territory, triggering a three-week standoff that was resolved when forces from both sides pulled back. The border between China and India has never been formally demarcated, although they have signed accords to maintain peace.

As talks got underway, dozens of exiled Tibetans protested in the capital against Wang’s visit by burning a Chinese flag and shouting anti-China slogans. The protesters, who gathered in several locations around the city, urged Modi to speak up for Tibetans during the talks.

“We … urge P.M. Modi that when he meets the Chinese foreign minister today he should talk about Tibet,” Tibetan Youth Congress president Tanzin Jigme told reporters. The Tibetan government-in-exile launched a renewed push last week for greater autonomy from Beijing, which has ruled the Himalayan territory since 1951.