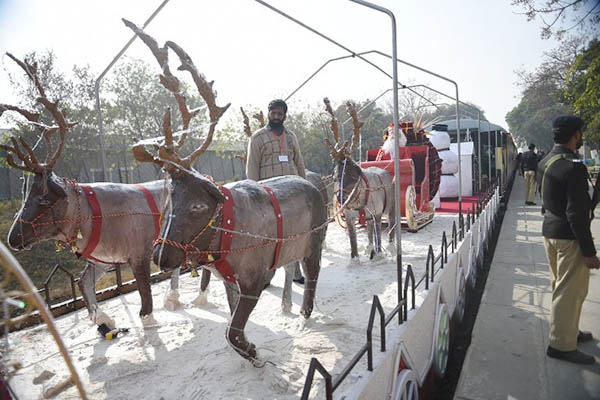 Themed train will crisscross the country with an aim to changing prevailing mindset.

A Christmas-themed train on Thursday set out on a journey to crisscross Pakistan in an effort to promote tolerance in the overwhelmingly Muslim country.

Adorned with Christmas lights and mock snowmen, and with carriages that have portraits and tributes to notable Christian Pakistanis, the government says it hopes to change mindsets in Pakistan, where attacks and persecution of religious minorities have become routine. Christians make up an estimated 1.6 percent of Pakistan’s 200 million people and have long faced discrimination—sidelined into lowly paid jobs and often the target of trumped-up blasphemy charges.

“This is a sign of tolerance, everybody will celebrate Christmas together,” Human Rights Minister Kamran Michael told AFP, adding that members of the public would be welcomed to visit the train and see its exhibits along its many stops.

It set off Thursday afternoon from Islamabad to Peshawar, capital of Khyber-Pakhtunkhwa province, and will travel to Lahore on Christmas Day before leaving for Karachi on Jan. 1.

Discrimination and violence against religious minorities is commonplace in Pakistan, where Muslims account for more than 90 percent of the population. A bomb attack on a park in Lahore on Easter Sunday in March killed 73 people, with the Pakistani Taliban claiming the attack and saying they had targeted Christians. Twin suicide attacks against churches in Lahore killed 17 people in March last year, sparking two days of rioting by thousands of Christians.

Agnes, a Catholic Pakistani who attended the launch ceremony, said she was grateful for the gesture, while acknowledging it was symbolic. “It’s nothing more than a function—but it makes me feel proud, it is a first step,” she said. “Let’s hope we can celebrate Christmas in peace and harmony in the many years to come.”