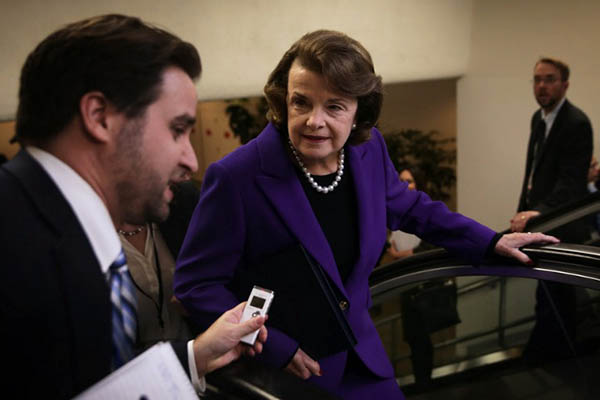 U.S. Sen. Dianne Feinstein, who pushed ahead for the publication of the torture report. Alex Wong-Getty Images North America—AFP

CIA torture of Al Qaeda suspects was far more brutal than acknowledged, did not produce useful intelligence and was so poorly managed it lost track of detainees, a scathing U.S. Senate report revealed Tuesday.

The Central Intelligence Agency also misled the White House and Congress with inaccurate claims about the program’s usefulness in thwarting attacks, the Senate Intelligence Committee said in its graphic report that revived the debate over interrogation techniques such as waterboarding.

President Barack Obama admitted some of the tactics detailed in the explosive report’s 500-page declassified summary were “brutal.”

“There are a lot of folks who worked very hard after 9/11 to keep us safe, during a very hazardous situation and a time when people were unsure of what was taking place,” he said in an interview with Telemundo. “But what was also true is that we took some steps that were contrary to who we are, contrary to our values.”

Among the findings: a CIA operative used “Russian Roulette” to intimidate a prisoner and another—untrained in interrogation techniques—threatened to use a power drill. Detainees were humiliated through the painful use of medically unnecessary “rectal feeding” and “rectal rehydration.” One died of hypothermia while shackled, some suffered broken limbs.

CIA director John Brennan defended his agency’s adoption of tough tactics under president George W. Bush in the aftermath of the September 11, 2001 Al Qaeda attacks on U.S. cities. He insisted that, while mistakes were made, brutal techniques “did produce intelligence that helped thwart attack plans, capture terrorists and save lives.”

U.S. embassies were on alert for reprisals as committee chair Sen. Dianne Feinstein pushed ahead with publication of the report, despite Secretary of State John Kerry warning it could provoke anger around the world.

The extensive detailing of the CIA’s interrogation of Al Qaeda suspects followed Obama’s admission in August that “we tortured some folks.”

Feinstein told the Senate at least 119 detainees were held under the program, with many subjected to “coercive interrogation techniques, in some cases amounting to torture.” The detainees were rounded up by U.S. operatives beginning in 2001 after Al Qaeda destroyed New York’s World Trade Center and damaged the Pentagon, and through to 2009.

They were interrogated either at CIA-run secret prisons in allied nations or at the U.S. detention center at Guantanamo Bay, Cuba.

Feinstein said some around the world “will try to use it to justify evil actions or incite more violence.”

“We can’t prevent that. But history will judge us by our commitment to a just society governed by law, and the willingness to face an ugly truth and say ‘never again.’”

While heavily redacted, the report is damning. “The interrogations of CIA detainees were brutal and far worse than the CIA represented to policymakers and others,” it said.

Conditions were particularly ghastly at a so-called black site nicknamed Cobalt, in an undisclosed country, where “at times detainees there were walked around naked and shackled with their hands above their head,” the report said.

Management of the program deteriorated so poorly in one country “that the CIA remains unable to determine the number and identity of the individuals it detained.”

The review of 6.3 million pages of documents concluded that use of the techniques “was not an effective means of obtaining accurate information or gaining detainee cooperation.”

Seven of 39 detainees known to have been subjected to so-called enhanced interrogations “produced no intelligence while in CIA custody,” while others “provided significant accurate intelligence prior to, or without having been subjected to these techniques.” And in several cases “the CIA inaccurately claimed that specific, otherwise unavailable information was acquired from a CIA detainee” as a direct result of the harsh interrogations.

The report was a years-long project of the committee’s Democratic members and staff. Republicans boycotted it, and on Tuesday they blasted it as a “political” assault on the CIA. “We found that those biases led to faulty analysis, serious inaccuracies, and misrepresentations of fact,” Republicans led by Sen. Saxby Chambliss said in their minority report.

But Republican Sen. John McCain, a former prisoner of war who was tortured in Vietnam, praised the report’s release and said harsh interrogations did little to make Americans safer. “I know from personal experience that the abuse of prisoners will produce more bad than good intelligence,” he said. “This question isn’t about our enemies, it’s about us,” he added. “It’s about who we were, who we are and who we aspire to be.”

There was also international consternation at the findings, with British Prime Minister David Cameron saying: “Those of us who want to see a safer, more secure world want to see extremism defeated. We won’t succeed if we lose our moral authority.”

Since coming to office in 2009, Obama has sought to distance the United States from past deeds and outlawed harsh interrogation. Lawmakers spent months negotiating with the White House on redactions, an undertaking that caused deep friction between the intelligence community and senators and their staff.

“When we had that program in place, we kept the country safe from any more mass casualty attacks, which was our objective,” he said.

Rights advocates hailed the program’s exposure but criticized the Justice Department announcement that it will not prosecute any U.S. officials implicated. “The CIA’s wrongful acts violated basic human rights, served as a huge recruiting tool for our enemies, and alienated allies worldwide,” said Anthony Romero, executive director of the American Civil Liberties Union. “Our response to the damning evidence in this report will define us as a nation.”