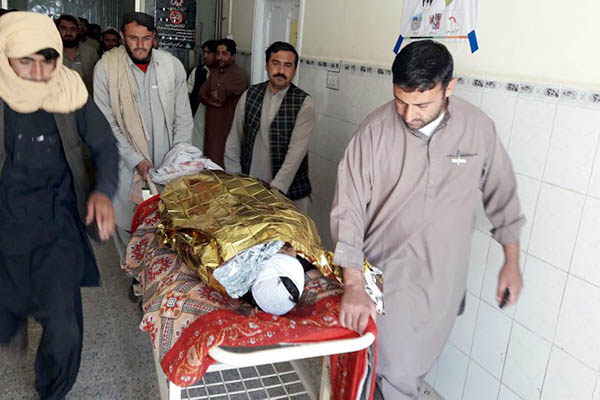 Pakistani and Afghan officials accused each other of killing civilians on Friday after gunfire erupted near a major border crossing where Pakistani census officials were carrying out a count, exacerbating tensions between the neighbors.

At least eight civilians were killed, according to officials—seven on the Pakistani side, and one on the Afghan side—and dozens wounded before the fighting near the Chaman border crossing subsided late Friday afternoon, officials said.

Samim Khpalwak, spokesman for the governor of Afghanistan’s southern Kandahar province, said the Pakistani census officials had strayed on to the Afghan side of the border and were attempting to count people living there.

The census enumerators are being accompanied by security forces while they carry out the count.

Kandahar police chief Abdul Raziq said one civilian was killed and up to 17 Afghan troops wounded, adding he had asked his men to hold fire—unless Pakistani forces begin shooting again. But Pakistan’s military and Foreign Office maintained they had told Afghan authorities where they would be in advance, saying that “indiscriminate” fire had killed seven Pakistani civilians and wounded 33 more, including four paramilitary border police.

“Pakistan reserves the right to fully respond if Afghanistan fails to take measures to stop this provocation,” a foreign office spokesman told a regular press briefing in Islamabad.

The two nations are divided by the “Durand Line,” a 2,400-kilometer frontier drawn by the British in 1896 and disputed by Kabul, which does not officially recognize it as an international border. Ethnic Pashtuns living along the border have traditionally paid it little heed, with villages straddling the frontier that have mosques and houses with one door in Pakistan and another in Afghanistan.

Friday’s gunfight prompted Pakistani authorities to shut down the Chaman gate—which leads from Pakistan’s Balochistan province into Kandahar, and is one of only two major crossing points—and summon the Afghan Charge d’Affairs in Islamabad in protest.

In a statement Prime Minister Nawaz Sharif said it was Afghanistan’s responsibility “ensure that such incidents are permanently stopped.”

The border is not the only area of dispute between the neighbors: Afghanistan has long accused Pakistan of sponsoring the Afghan Taliban, though Islamabad says it provides the militants with safe haven as a “lever” to bring them to peace talks. Pakistan has also accused Afghanistan of harboring militants who carry out attacks in its territory.

Pakistan embarked on the enormous task of conducting its first census in almost two decades in March. The fast-growing country is the sixth most populous in the world, with an estimated 200 million people, but has not held a census since 1998, despite a constitutional requirement for one every decade.