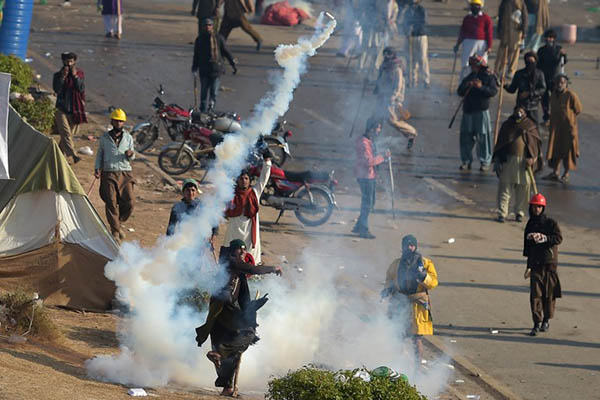 A policeman killed, over 130 people injured in ongoing crack down on Labaik protesters

Security forces clashed violently with hardline religious protesters in Islamabad on Saturday, with at least one person killed, more than 130 injured and small demonstrations spreading to other cities after police cracked down on an Islamist sit-in.

Thousands of security forces fired tear gas and rubber bullets as the demonstrators blocked roads and burned police vehicles around the site of the sit-in, which has choked a main highway and virtually paralyzed the capital for nearly three weeks.

An Islamabad police spokesman confirmed that a policeman was killed in the fighting after he was struck in the head by a rock, and an AFP journalist saw what appeared to be the body of at least one demonstrator lying on the road in the capital. At least 139 injured people have been taken to the Pakistan Institute of Medical Sciences in Islamabad, a spokesman from the hospital told AFP, adding that 93 of them were members of the security forces.

The sit-in by the little-known Tehreek-i-Labaik Ya Rasool Allah has blocked the main road into the capital used by thousands of commuters since Nov. 6, causing hours-long traffic snarls and enraging commuters.

The protesters, who before Saturday numbered some 2,000 people, are demanding that law minister Zahid Hamid resign over a hastily-abandoned amendment to the oath that election candidates must swear. Demonstrators have linked it to blasphemy and claim the oath was softened to enable the participation of Ahmadis, a long-persecuted Islamic minority sect.

Smoke and tear gas filled the air in the ongoing, hours-long bid by some 8,500 police as well as paramilitary Rangers and Frontier Corps forces to clear the demonstrators, which began soon after dawn.

Fresh protests were also springing up in other cities. Police in Karachi said some 200 protesters were blockading a major road in the southern port. Smaller demonstrations were also springing up in Lahore and other cities, according to local media. Pakistan’s media regulator barred local TV channels from broadcasting live images from the scene as violence intensified.

Authorities have hesitated to act against the sit-in, citing fears of violence as the demonstrators have vowed to die for their cause. But their weeks of inaction have sparked the wrath of residents as well as Pakistan’s judiciary, with the Supreme Court issuing a blistering statement earlier in the week and the Islamabad High Court threatening to hold officials in contempt.

The sit-in had previously cost the life of an eight-year-old child whose ambulance could not reach a hospital in time due to the blocked roads.

Analysts and critics have accused the government of bungling its response to the protest, and allowing a minor issue to grow into a headline-grabbing and potentially dangerous situation. It set an alarming precedent, that “anytime anyone is upset with the government, the capital may be choked and the government will bend its knees,” warned Zeeshan Salahuddin of the Center for Research and Security Studies, a think tank in Islamabad.