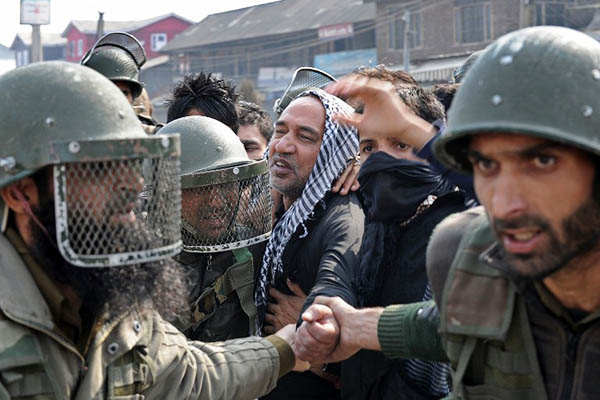 Police in Srinagar fired tear gas to disperse crowds of protesters chanting anti-India slogans and hurling rocks, an officer said on condition of anonymity as he was not authorized to speak to the media.

The protests came after soldiers fired at a private car on the outskirts of Srinagar on Monday killing two passengers and critically wounding another two.

Indian-administered Kashmir Chief Minister Omar Abdullah said the “avoidable deaths” had marred the political atmosphere, already strained by devastating floods in September, ahead of state elections due to start later this month. “Such killings have no place in an otherwise improving security environment where militancy incidents are at record low levels,” Abdullah tweeted.

Separatists opposed to Indian rule have called for a strike on Wednesday to protest against the killings. Police registered a criminal case against the soldiers, while the army ordered an enquiry into what it called the “unfortunate loss of lives.”

“Nothing incriminating was found from the possession of slain or injured youth,” police officer Muhammad Irshad told Greater Kashmir, a local daily. The two victims were buried on Tuesday as Shia Muslims marked Ashura, traditionally a flashpoint day in Indian-administered Kashmir. The traditional mourning procession has been banned in the state since 1990 when an armed rebellion against Indian rule broke out.

Kashmir has been divided between India and Pakistan since 1947, but both claim the region in full. Tens of thousands of people, most of them civilians, have died in fighting between Indian forces and a dozen rebel groups seeking independence or a merger of the territory with Pakistan.

Kashmir is still reeling from devastating floods that killed more than 200 people and destroyed public infrastructure and businesses in September.