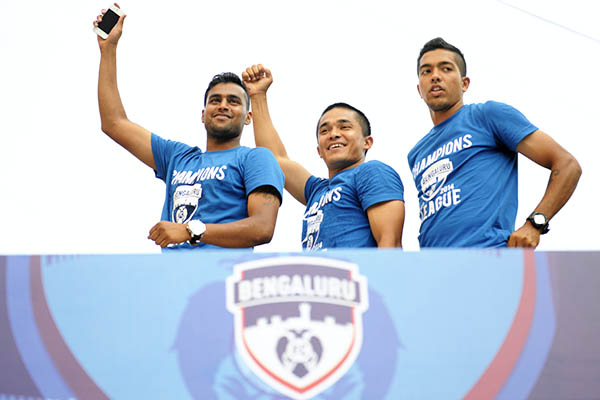 The ace striker also hoped the short series would help improve the political climate between the hostile neighbors. “All the matches that I have played against them [Pakistan] have been much more than a normal game and both the sides [are] aware of it,” Chhetri said. “For them too, this is a special game. An Indo-Pak clash is always special.”

Football takes a back seat in the cricket-mad subcontinent but such is the rivalry between the two countries that any sporting clash attracts keen interest. “History will tell you that sports has always been the binding factor in promoting bilateral relations between the two countries,” Chhetri said. “It’s important to build [the] relationship via sports, especially with your neighboring countries.”

India suspended bilateral sporting ties with its neighbor in the aftermath of the deadly 2008 attacks on Mumbai, blamed on militants from Pakistan. That deadlock hurt cricket the most, a game millions are obsessed with on both sides of the border.

The Pakistan cricket team did tour India for a short limited-over series in December 2012-January 2013 but the countries are yet to play a full bilateral series.

The football series also offers the teams an opportunity to assess their strengths and weaknesses ahead of the Asian Games in South Korea next month.

Online tickets for Sunday’s game were sold-out with brisk selling also reported at the stadium’s box office. “The response has been very good,” said Kunaal Majgaonkar, the media manager for All India Football Federation. “We had offered 2,400 tickets online and all of these have been sold out. Window sales are also brisk and 85 percent tickets have been sold so far,” he said.

Security has been stepped up in and around the Bangalore Football Stadium, the match venue. Four years ago, at least eight people were hurt in two bomb blasts at a cricket stadium in Bangalore that police blamed on Indian Muslim militants.

India has long struggled in world football and is currently ranked 150th out of 208 in the governing body FIFA’s rankings while Pakistan is further down in 164th place. The second and final match will be played on Wednesday.