Home Lightbox Clowning Around With Refugees

Clowning Around With Refugees 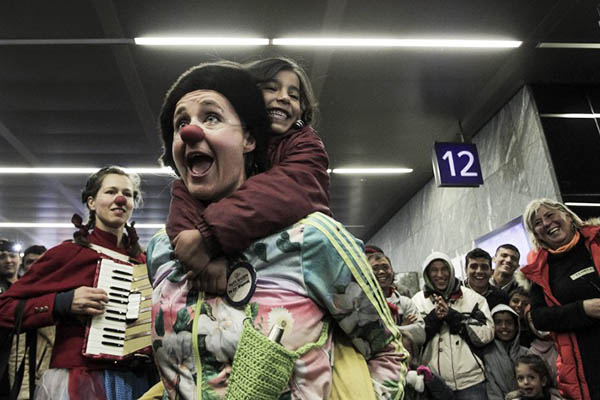 It’s miserable and raining outside as a few hundred tired migrants mill around a damp underpass at Vienna’s main train station waiting to continue their long journey to northern Europe. Suddenly, a man wearing a red nose, tartan plus-fours and a brown leather aviator’s cap enters, leading a noisy procession of three clowns—all with a silly but also serious mission.

They are from Red Noses Emergency Smile Austria, a project using 66 clowns to spread some cheer among the thousands of migrants still arriving Austria daily, particularly the children. “You don’t need to know the language, you just laugh and you feel a connection,” said Simone Mang, a spokeswoman for the organizers. “Children need to have a little time to themselves, and play and laugh and forget about the circumstances,” she said.

At first there is a stunned silence as the clowns—professional actors who underwent special training—stomp in, playing an accordion and rattling tambourines. But as the trio engages in a slapstick routine, the ice breaks. Laughter, clapping and cheering erupts as people gather round, carrying children on their shoulders and filming the scene on their phones.

Then there is a dancing session just for the children, who are given tambourines, ribbons and little pots of bubble-blowing solution.

Afterwards they are led away, giggling, to a special playroom where they can draw, paint and interact with the clowns. “They are happy, at least we find peace,” said Hossam, a Palestinian, as he watched his four young children play, blowing bubbles and leaping onto a blue crash mat. “I escaped from my country for them… For their future, to have good education, to have a good life, if God is willing.”

“The [reaction] is amazing. So many eyes, so many beautiful eyes. Such beautiful colors, so clear and so direct,” one of the clowns, Marie Miklau, 37, told AFP. “But at the same time we had very sensitive moments to look behind the party to see the more silent people, the humans inside. You see also the journey they had, and also the suffering,” she said.

The project came from Red Nose Clowndoctors, a charity sending clowns into Austrian hospitals to cheer up patients since 1994 and now active in 10 countries. It is part of an immense voluntary effort that has sprung up since migrants began flooding into Austria in large numbers in September—mostly on their way elsewhere—and who keep coming every day.

Train of Hope, for example, a private initiative coordinating the volunteer effort, has 3,500 helpers who have put in a total of 300,000 man-hours in the past five weeks, its spokesman Benjamin Fritz told AFP on a tour. “It began with a couple of tables and some bottles of water,” the 26-year-old explains on a tour of tents and containers around the back of the station, a hive of activity. “Now it’s like a small town.”

Organized largely on social media, the initiative provides everything from hot food and medical help—they even have an electrocardiogram machine with doctors on hand—to clothing and hygiene articles. There are also interpreters, psychologists and a missing persons point that posts pictures on Facebook and shares information with other organizations abroad.

The project has been so successful that organizers have asked people to stop donating certain items such as crayons for kids, toilet paper, tampons and even wheelchairs. They still need many things, however, like formula milk, cereal bars and razors. And with winter fast approaching, the Facebook page now calls for warm coats, thick socks, hats and gloves.

More and more of the new arrivals are becoming sick because of the weather. And at the same time, there has been a noticeable drop in donations and volunteer numbers, Fritz said. “If it snowed tomorrow, then we would clearly have a problem. But we have had countless problems every day over the past five weeks and we solved them. We will manage somehow,” he said. “We will keep doing this until there are no more migrants here.”