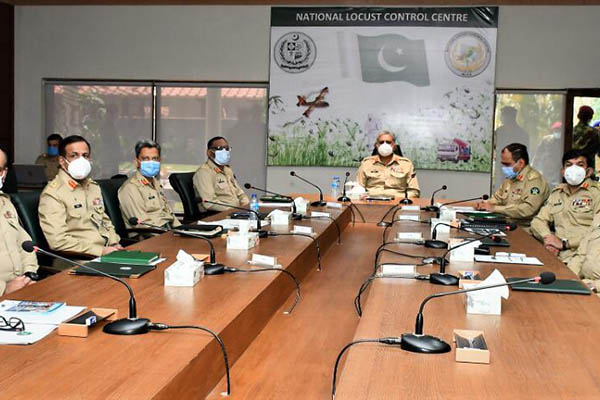 The Army will assist the civil administration’s efforts to combat locust attacks, Chief of Army Staff (COAS) Gen. Qamar Javed Bajwa said on Thursday, according to a statement issued by the ISPR.

According to the Inter-Services Public Relations statement, Gen. Bajwa visited the National Locust Control Center (NLCC) in Rawalpindi and was briefed on the ongoing efforts to overcome the locust invasion by its chief coordination, Engineer-in-Chief Lt. Gen. Moazzam Ejaz.

Appreciating the NLCC’s role “in synergizing national efforts in line with the National Action Plan,” he reiterated that the Army would make all possible resources available to help the civil administration combat the locust threat. The Army chief also “stressed effective control operations as essential for ensuring food security and mitigating negative ecological impact.”

“The government has already declared a national emergency in this regard,” the statement added.

Also on Thursday, Foreign Office spokesperson Aisha Farooqui informed her weekly press briefing that Pakistan and India were cooperating in the fight against the locust invasion sweeping across South Asia under a forum operated by the U.N.’s Food and Agriculture Organization.

Pakistan and India are both part of the FAO’s Commission for Controlling the Desert Locust in South-West Asia (SWAC), which is one of the oldest of the three regional commissions within the global locust early warning and prevention system. Farooqui said a ministerial meeting of the commission in March had decided to reactivate communication between all member states on the locust situation and a Technical and Operational Coordination team had been formed to exchange information, enhance coordination at the border areas, and increase synchronicity in combatting the desert locust outbreak.

She said Pakistan had been participating in the forum’s meetings weekly, and described the cooperation as “fruitful” in exchanging information on the shared border of the two countries. “We believe that the respective Technical Teams have been coordinating appropriately through FAO,” she added.

Pakistan and India are facing the region’s worst locust attack in nearly three decades, with experts warning that crops worth upwards of $8.71 billion could be lost. Observers have sounded alarms about food security, especially in the wake of the coronavirus pandemic.