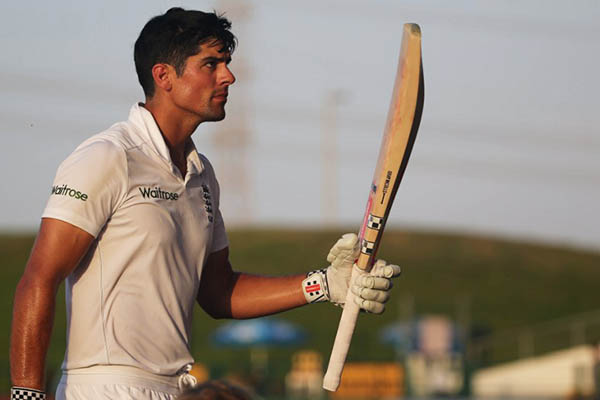 Pakistan has won seven series since adopting the U.A.E. as its home ground.

England skipper Alastair Cook on Wednesday said he wanted his team to become the first to beat Pakistan in their adopted home of the United Arab Emirates, comparing it to beating India in India.

Cook captained England to a remarkable come-from-behind 2-1 win over India in India a few months after watching a team led by his predecessor Andrew Strauss routed 3-0 by Pakistan in the U.A.E. in 2012.

“Two good sides in their home conditions. No-one has beaten Pakistan here yet and I would be great to be the first side to do it,” he said ahead of the second Test against Pakistan starting on Thursday.

Pakistan have not lost any of the previous seven series in the U.A.E. where they were forced to play after international cricket was suspended on their home grounds following the 2009 terrorist attack on the Sri Lanka team bus in Lahore.

England came close to taking a 1-0 lead in the series in the first Test in Abu Dhabi last week when they fell short by just 25 of the 99-run target with bad light forcing umpires to call off the match.

Cook said he expects the Dubai pitch to take more spin. “It will turn more and a bit quicker—last time [2012] there was more for the seamers. It’s a unique stadium, the shadow is still there at 10 a.m. and that allows for dampness in the wicket and movement. It should be a better cricket wicket,” said Cook.

Pakistan captain Misbah-ul-Haq said he would never be guilty of taking England lightly. “I am saying this from the first day that they are a professional team and are very determined,” the skipper said.

“They have learnt from their mistakes of the past and are a totally different team and that they have shown [in Abu Dhabi] so we have to lift our performance if we want to win.”

The third and final Test will be played in Sharjah from Nov. 1.