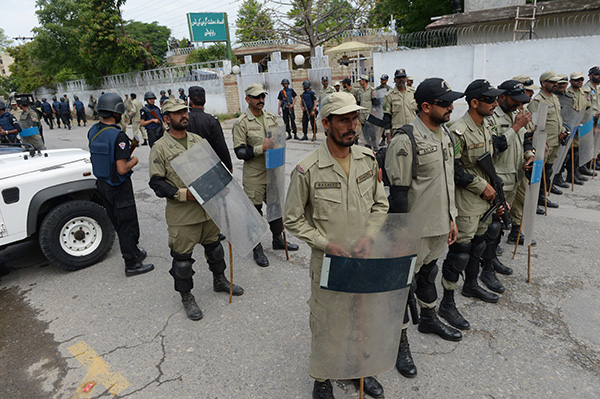 Former president’s spokesman says he will challenge the decision.

The Peshawar High Court moved on Tuesday to ban former president Pervez Musharraf from contesting elections for the rest of his life, a step his aides immediately vowed to challenge.

The retired general has been under increasing pressure from Pakistan’s judiciary since returning last month from self-imposed exile to contest elections and has been under house arrest since mid-April. He will also spend the May 11 general elections under lock and key at his Islamabad villa, after an antiterrorism court in the garrison city of Rawalpindi extended his detention for 14 days over his alleged role in the death of politician Benazir Bhutto in 2007.

Just hours later, the Peshawar High Court dismissed an appeal against his disqualification from standing for election in the district of Chitral and banned him for life from running for Parliament. According to the court ruling, the ban has been imposed because Musharraf abrogated Pakistan’s Constitution twice and detained judges when he imposed a state of emergency in 2007.

A spokesman for Musharraf’s All Pakistan Muslim League party, Muhammad Amjad, was circumspect. “We can challenge it,” he said. A court in Lahore is scheduled to rule next week on separate appeals against his disqualification from contesting the elections. He applied to stand in a total of four constituencies. “If the court upholds the disqualification then we will go to the Supreme Court,” Amjad said.

Musharraf had promised to “save” the country from militancy and economic collapse, but was barred from running as a candidate over charges dating back to his 1999-2008 rule. Now, he may face problems even voting in the polls. Musharraf’s lawyer Ibrahim Satti said his client could request a postal vote but said a government-facilitated visit to a polling station would be unlikely “because of security concerns.”

The retired general is also under house arrest for sacking judges when he imposed emergency rule in 2007. Besides the sacking of judges, he faces a third legal case over the 2006 death of a Baloch rebel leader and has been threatened with death by the Taliban.

Nobody has ever been convicted or jailed for Bhutto’s assassination. Musharraf’s government blamed the killing on Pakistani Taliban chief Baitullah Mehsud, who denied any involvement and was killed in a U.S. drone attack in 2009. But Bhutto’s son, Bilawal Bhutto Zardari, who is the chairman of her party, has accused Musharraf of failing to stop her murder. In 2010, a U.N. report said Bhutto’s death could have been prevented and accused Musharraf’s government of failing to give her adequate protection.

The decision is correct but smells of extreme bias. The current judiciary is the aggrieved party therefore cannot try the ex dictator.