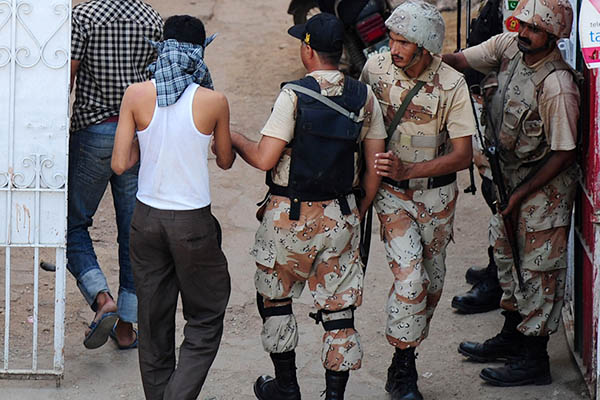 Rampant violence has terrorized Karachi, Pakistan’s biggest city and economic hub, in recent years, but a recent security crackdown seems to have brought a lull in the bloodshed.

Kidnappings for ransom, sectarian attacks and gang warfare have spiraled since 2008, terrifying the city’s 18 million inhabitants and prompting tens of thousands of businessmen to flee to the safety of Punjab province.

The city claimed a grisly record last year as 2,124 people were murdered on its streets, according to the Citizens-Police Liaison Committee (CPLC), the highest number since records began nearly 20 years ago.

“The merciless killings have turned this ‘bride of cities’ into a city of ghosts and darkness,” said Tauseef Ahmed Khan, a political analyst, referring to Karachi’s Persian nickname.

But an operation by police and paramilitary government Rangers in the city’s tangled maze of teeming streets, launched early September on the orders of the federal government, seems to be having some positive effect.

The CPLC said that in September 155 killings were reported—down from 280 in August. With a total of 2,058 murders up to the end of September 2013 it is on course to beat last year’s record, but the crackdown appears to have at least slowed the violence.

Aftab Chunar, the head of the autopsy department of the city’s largest state-run Civil Hospital, said that before the operation he was receiving 16 to 18 bodies a day. Now the figure has fallen to three or four.

On the streets, there is relief.

“After a long time there is a feel of normalcy in the city. Now it seems that criminals are on the run and I pray that the good old times return to the city,” said Aziz Rana, a 45-year-old bank worker.

Under the military rule of former president Pervez Musharraf, the murder rate hit a low of just 76 killings in 2003 before rising to 777 in 2008, when he was ousted. The figure shot up from 2010 onwards as criminal gangs backed by rival political parties grew in power and sectarian and ethnic violence swelled.

Amir Ahmed Shaikh, until recently the police chief of southern Karachi, the worst affected part of the city, said gangsters backed by political clout had held Karachi to ransom. Extortion has become a hugely lucrative source of earnings for the gangs, with one intelligence official saying around $14 million a month is extorted in Karachi.

Traders and businessmen are the ideal prey for the extortionists, and many have fled the city, which accounts for more than 40 percent of Pakistan’s GDP.

“Some 40,000 to 45,000 traders and shopkeepers have migrated from Karachi to the Punjab province as their properties and lives both are not safe and secured here,” said Atiq Mir, chairman of Karachi Traders Alliance, a representative body of the city’s small to medium traders.

The current crackdown has seen Rangers use powerful motorbikes to chase suspects down the narrow, twisting streets that remained off-limits in previous missions using heavy vehicles. Hundreds of alleged target killers, extortionists and gangsters have been arrested since the start of the operation, Rangers and police say.

Fateh Mohammad Burfat, professor of sociology and criminology at the state-run Karachi University, said the crackdown seemed to be working.

“Peace seems to have returned to the city and the common man, after a long time, has breathed a sigh of relief ever since the operation began,” he said. “It is the neutrality of the operation which is key to its success and so far the police and Rangers are executing the operation indiscriminately and with objectivity.”

Others are not convinced the lull will last. Making arrests is one thing, but getting convictions in Pakistan’s sclerotic legal system is another. Police say more needs to be done to protect witnesses, currently too scared of reprisals to give evidence.

Tauseef Ahmed Khan, a professor at Federal Urdu University in Karachi and a prominent newspaper columnist, said the real proof of the operation’s effectiveness would come with the Islamic holy month of Muharram, due to start in early November. “It seems artificial to me though there are some vital signs as they have arrested criminals even-handed,” said Khan. “But one would like to see how the month of Muharram passes and it would be a good litmus test of the ongoing operation.”

Muharram, which culminates with Ashura, the holiest day in the Shia Muslim calendar when the faithful march to mourn the seventh-century killing of Imam Hussein, is frequently a flashpoint for sectarian violence.

You reap what you sow. This crop of Goondas and Terrorists was sowed about 25- 30 years ago and now it has become a full grown beast and still nourished by our Elites sitting as head of political parties inside the country and abroad. Whenever there is full honest effort, if at all, to deal with those elements their supporters come out shamelessly claiming that they are being targeted based on their ethnicity, language and region. The best solution in this situation would be do a fair operation and in the process whoever comes to support those apprehended should be equally charged as accomplice to those criminal no matter who that figure is–an MPA, MNA, CM, PM, President, Army chief or below him or any body for that matter. I know a lot of people may laugh at this but this is THE SOLUTION if you want this country saved and regain its respect in the masses and in the world. BUT the question is who will hang the bell in the cat’s neck. I am sure there are people in my country who can do this if they are given the chance and they punish their sons and daughters the same way as any other criminal for a certain crime.

The only reason of bloodshed is the war of power, between multiple political parties in the city. Their war has given the city nothing but terror … The largest and may be the richest city of Pakistan has the most pathetic public transport buses and oldest cars and scooters in the country, reason? insecurity. People don’t want to “show off” their wealth or they fear that their car or bus may be stolen or robbed or burned anytime.
Last political govt which claimed to be the first to complete 5 years included all the parties active in Karachi (PPP, MQM, ANP) but they didn’t care for the lives of people of this city while fighting for city’s control.

I am unable to understand why MQM always has issues with any appointed Police or Rangers officer and start crying wolf “hamein aitmad mein nahi lia gya” .. who the hell are you to be taken into confidence? What have you given this city which you claim as an owner, if you are clean, then why worry?

I hope the current operation will continue and achieve the goal of bringing the city back to life inshaAllah.