Home Latest News Curfew Back On in India-administered Kashmir

Curfew Back On in India-administered Kashmir 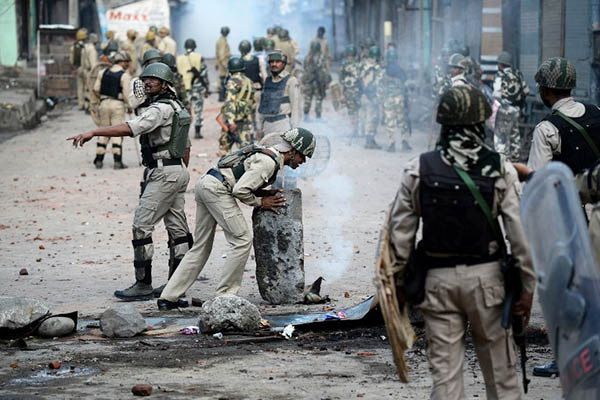 Authorities reimposed a curfew in parts of India-administered Kashmir following fresh clashes on Monday between protesters and Indian security forces hours after the government announced an end to a 52-day lockdown.

Restrictions had been lifted early Monday in most parts of Kashmir Valley, including Srinagar, but thousands of protesters across the disputed region took to the streets, forcing authorities to reimpose a curfew in several areas.

At least 12 people were injured in the fresh wave of violence, police and hospital officials said, where 68 civilians and two police officers have been killed and thousands injured since unrest erupted last month.

Hundreds of residents rallied in parts of Srinagar and in the northern town of Bandipora after the curfew was lifted, throwing stones at security forces who fired live rounds into the air and tear gas to disperse them, witnesses and an AFP photographer said.

Schools and businesses remained closed and many streets in Srinagar were largely deserted as troops in riot gear patrolled on foot.

Kashmiri separatist groups have extended their shutdown call till the end of the month to press for their demands, which include an end to Indian rule in the Himalayan region. The current violence, the worst to hit the region since 2010, was triggered by the July 8 killing of a popular rebel leader, Burhan Wani, in a gunbattle with soldiers.

Several rebel groups including Wani’s Hizbul Mujahideen have for decades fought some 500,000 Indian soldiers deployed in the territory, demanding independence for the region or its merger with Pakistan.

Indian Prime Minister Narendra Modi appealed for calm in the region at the weekend, criticizing those responsible for encouraging youngsters to become involved in the recent unrest.

Kashmir has been divided between rivals India and Pakistan since their independence from Britain in 1947. Both claim the Himalayan territory in full. Tens of thousands, mostly civilians, have died in the fighting since the armed rebellion against Indian rule began in 1989.