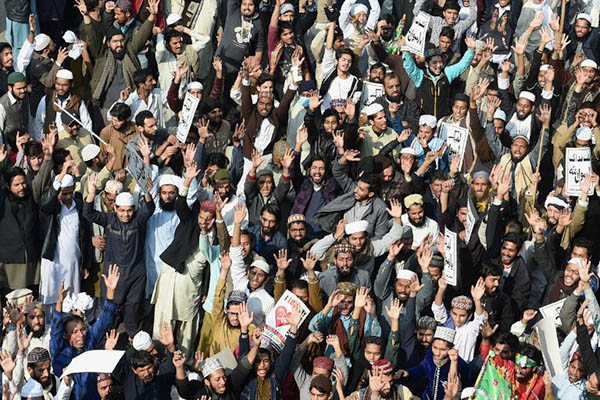 Pakistan’s Barelvi dharna is over. Now comes the fallout

After the formal end of a three-week-long all-Pakistan Barelvi dharna (sit-in) in Islamabad, a “dissident” dharna kept on flouting the writ of the state in front of the Punjab Assembly in Lahore. The Maulana Asif Jalali-led faction of Tehreek-i-Labaik Ya Rasool Allah (TLY) wouldn’t let go and insisted that Punjab Law Minister Rana Sanaullah too be sacked for saying that the apostatized-under-law Ahmadis were considered Muslims by some clerics. Labaik seemed to be now asking for the head of two law ministers instead of one—federal lawmaker Zahid Hamid and provincial Rana Sanaullah.

At the climax, because of firm signals from one of the parties who signed the surrender of the Pakistan Muslim League (Nawaz) government in Islamabad, Jalali had to give ground while falling out with Khadim Hussain Rizvi, his chief. His position was weak on both counts: the party and the signatories didn’t bite his more radical punishment of the PMLN. But his savagely vocal challenge drew strength from another Barelvi leviathan: Peer Hamiduddin Sialvi who enjoyed the loyalty of a number of PMLN MNAs and MPAs. “Saint” Sialvi had blessed the assault of Faizabad by going there and delivering himself of a vitriolic diatribe against the government with the resignation letters of 14 partymen in his pocket. He looked like the final hooded executioner of Nawaz Sharif’s party.

Jalali finally resigned from Labaik after parleys with the Punjab government and called off his sit-in after getting Lahore to agree on his terms, including the re-Islamization of the textbooks that the Lahore government had just cleansed of hate-filled agitprop. The great all-Pakistan dharna is at an end but not without damaging the state even more than the Taliban who nodded their approval of the Barelvi gutting of the state by attacking and killing 8 in Peshawar in the same week. All the political parties and all the TV channels looked upon the salami-slicing of the ideological state in approval with snide remarks about the dispensable “liberal fascists” of Pakistan.