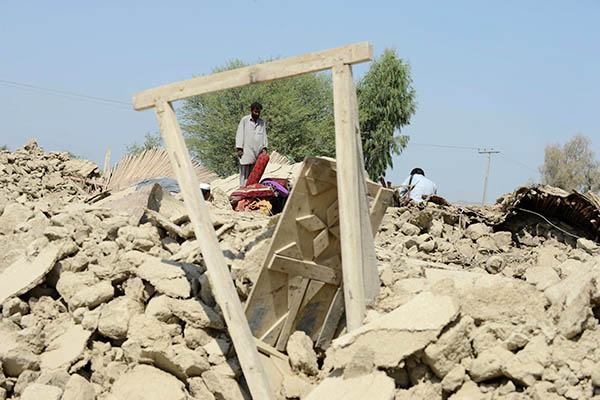 The death toll from a huge earthquake in southwest Pakistan this week has soared to around 350 people with over 500 injured, officials said Thursday, among fears the toll could still rise.

The 7.7-magnitude quake hit on Tuesday afternoon in Balochistan province’s remote Awaran district. Besides flattening homes and affecting more than 300,000 people in six districts, according to the Balochistan government, the earthquake also created a new island off the coast.

“At least 348 people have been confirmed dead and 513 others injured,” said Abdul Latif Kakar, the head of Balochistan’s Provincial Disaster Management Authority (PDMA). “Only in Awaran district, we have confirmed the death of 305 people, while we have received information about 43 dead from the other worst affected district, Kech,” he said.

The Army has rushed medical staff and troops to the devastated area to help with rescue efforts, along with seven tons of food and a ton of medicine. Six helicopters are taking part in rescue work, the military said.

The scale of the territory involved is daunting. Balochistan, Pakistan’s least developed province, makes up about 45 percent of the country’s total area, and Awaran’s population is scattered over more than 21,000 square kilometers.

On top of the difficult terrain, the area is rife with separatist and Islamist militants as well as bandits.

Tremors were felt on Tuesday as far away as New Delhi and even Dubai in the Gulf, while people in the Indian city of Ahmedabad, near the border with Pakistan, ran into the streets in panic.