Defense Spending Up in New Budget 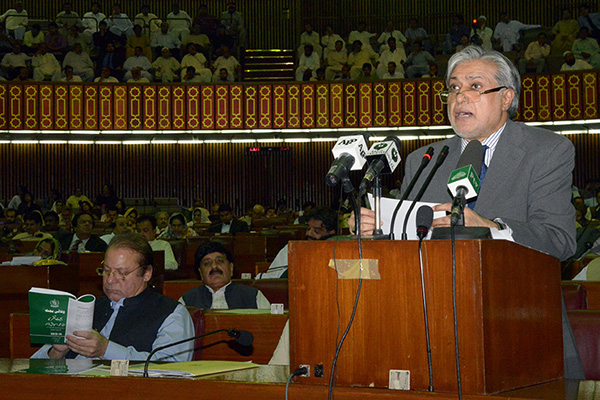 The Pakistan Muslim League (Nawaz) government announced Wednesday a 10 percent increase in defense spending a week after taking office, despite a crippling budget deficit of 8.8 percent.

The budget for fiscal year 2013-14, which begins July 1, comes against a backdrop of weak economic growth, high inflation, dwindling foreign exchange reserves, and unprecedented power cuts. It has a total estimated outlay of Rs. 3.9 trillion, which is 24.4 percent higher than the 2012-13 budget. In fact, the new budget earmarked Rs. 627 billion for defense, a 10 percent increase compared to Rs. 570 billion in the outgoing year, ending June 30.

Finance minister Ishaq Dar told the National Assembly that the government would clear $5 billion in circular debt from the energy sector within the next 60 days. “This will greatly help minimize power cuts in the country,” Dar said, giving no details on how the government would find the money to pay the bills.

Years of mismanagement, underinvestment, and alleged corruption cause blackouts of up to 20 hours a day in blistering summer heat, when temperatures reach up to 50 degrees Celsius.

Pakistan is still paying off a $11.3 billion International Monetary Fund loan from 2008. Analysts believe the government must return to the lender to stave off a balance-of-payments crisis. “Our government has chalked out a comprehensive reforms program for economic development, which will control inflation, build the revolutionary change in the country’s infrastructure, and provide employment to youth,” Dar said.

Again, he provided no precise details.

Dar promised that the government would reduce the budget deficit by 2.5 percent in the forthcoming year to 6.3 percent and to 4 percent within three years. “The key point of our budget this year is to reduce the fiscal deficit and prevent the national economy from being adversely affected,” the minister said.

In addition, the new budget allocates Rs. 57.4 billion for development of higher education, which includes Rs. 18.4 billion for a proposed public sector development program. It has also allocated Rs. 35.6 billion for the health sector, which is now a provincial issue following the implementation of the 18th Amendment to the Constitution.