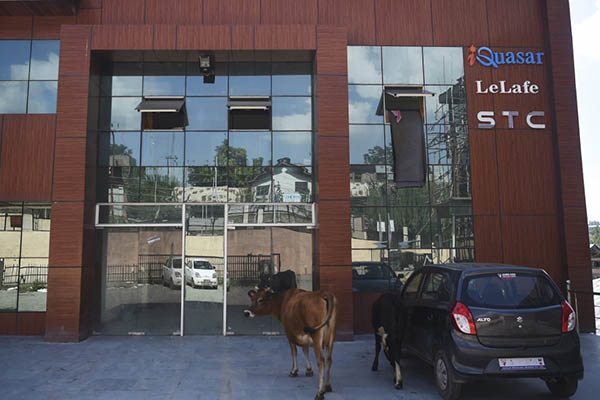 Offices of the internet provider STC, and other software companies, lay shuttered in the Rangreth industrial estate of Srinagar. Punit Paranjpe—AFP

The coffee machines have been cold, computer screens blank and workstations empty for two months in India-held Kashmir’s Silicon Valley, as a Delhi-imposed communications blockade on the troubled region takes a growing toll on business.

The dozen software development companies in the Rangreth industrial estate on the edge of Srinagar bring tens of millions of dollars of crucial revenue into the region each year. But the cutting of internet and mobile phone links on Aug. 5, when the New Delhi government ended India-held Kashmir’s semi-autonomous status, has crippled business.

Rangreth has become a ghost town, a symbol of suffering across the region.

The government said the crackdown, backed by the presence of hundreds of thousands of security forces, was needed to head off trouble by insurgents in the Muslim-majority territory. Pakistan also claims Kashmir, which the two neighbors divided when they became independent in 1947 and have squabbled over ever since.

Markets, banks, schools, clothes stores and the fledgling hi-tech industry have all been closed. Many locals say the shutdown is in protest at the government action. Authorities blame militant threats.

Rangreth’s warehouse-style halls, normally packed with young T-shirted programmers, are empty. “It’s a devastating blow to the software business in Kashmir. Internet is like oxygen to our business and it has been taken away,” the owner of one company with clients all over the world told AFP on condition of anonymity. The businessman said clients’ patience was running out. “We’re likely to lose them.”

Jahangir Rasool, chief executive of internet provider STC, said he was detained by police for six days for keeping lines open for a few hours to help another company in his building that has clients in the United States. He said his firm and others have the firewalls and protocols to block social media or “political propaganda” on the internet. But he said Indian authorities would not listen.

“They sent police and intelligence agencies to inspect our systems. We told them that the IT sector would collapse [without the internet]. They said: ‘Let it. We are not taking any risks’,” declared the director of another company with clients in the Middle East.

Authorities have unblocked most landlines. But apart from 6,000 mobiles used by police and government officials, most of India-held Kashmir’s 880,000 mobile connections and internet services remain suspended.

State governor Satya Pal Malik in August said the lines were mainly useful as a “weapon” for “terrorists and Pakistanis for mobilization and indoctrination.”

Some IT companies have already laid off workers, many are preparing to move their business away from India-held Kashmir.

Rasool at STC said his company had lost more than $2.8 million in business since Aug. 5 and has laid off two-thirds of its 370 employees. “We can’t function in a total blackout,” said STC’s finance chief Abid Bhat who compared the shutdown to being “blind.”

High-tech is not alone in its suffering. Not a single car or truck has been sold in two months by dealers across the Kashmir Valley, said Aawan Ahmad Narwaroo, head of one Srinagar car dealership. He reckoned about 5,000 vehicles and motorbikes were sold in the same two months last year.

Official records show no new vehicles have been registered with the authorities since Aug. 5. “It’s a collapse of Kashmir’s economy. It’s not possible to calculate the snowballing losses,” Kashmir Chamber of Commerce and Industry vice president Nasir Hamid Khan told AFP. “About 1,200 trucks carrying Kashmiri produce used to ply daily on the main highway out. Today we hear not even 100 do,” Khan said.

At least three top business leaders were among thousands arrested after the Aug. 5 clampdown. The executives are still in detention. Speaking on condition of anonymity, a top police officer told AFP the decision to reopen mobile and internet services would be taken by India’s Home Minister Amit Shah. “He [Shah] is asking for guarantees that no large scale protests will happen if the services are resumed. And there is no official here today confident enough to put his neck on the block,” the police official said.