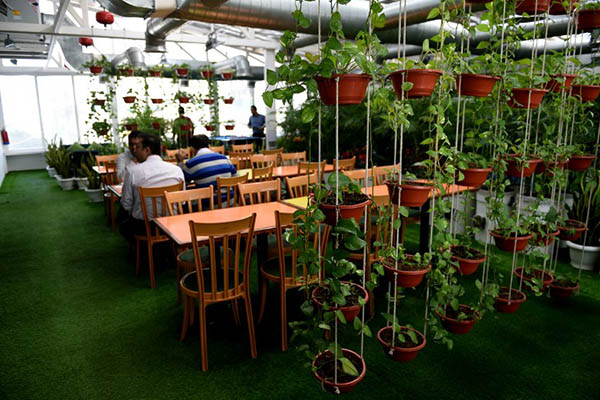 From Alpine air to carbon converters, businesses are looking for their own solutions

Political apathy over the poisonous smog choking India’s capital has led many like businessman Kamal Meattle to take matters into their own hands, with an office building he says pumps air as fresh as from the Swiss Alps.

From the outside, the Paharpur Business Center looks like any modern office block. But inside it is a virtual jungle where rooms and corridors are lined with more than 7,000 potted plants and creepers. The greenhouse terrace, with artificial grass and green walls, houses an “air washing” system that moves polluted outside air through a series of cleaning filters.

It is then pushed through the greenhouse where the plants remove bacteria, fungus, carbon dioxide and other toxins, before the air conditioning pumps it to workers on the floors below.

“It would be like working in Gulmarg in Kashmir or Davos in Switzerland in this building,” 73-year-old Meattle told AFP as he looked out at the smog from the protection of the lush rooftop nursery. “You are actually right now sitting in an air tank,” he said, referring to the greenhouse where PM2.5—the most harmful particulates in the air—registered nearly zero compared with 415 outside, according to Paharpur’s monitoring system.

The outside level is more than 16 times the World Health Organization’s safe limit.

A Massachusetts Institute of Technology graduate and trustee of Al Gore’s Climate Reality Project, Meattle began thinking about a clean office project years ago when he rejected doctors’ advice to move away from the polluted capital for his health. “I wanted a solution for myself and I didn’t want to leave Delhi,” he said.

His center, whose tenants include Amazon, Samsung and Microsoft, is now rated the city’s healthiest building by the Indian government, and Meattle says people who work there benefit from improved blood oxygen levels, better brain function, and fewer asthma and eye irritation cases.

Delhi chokes every winter as cool air traps a toxic blend of pollutants from crop burning, car exhausts, open fires, construction dust and industrial emissions close to the ground. The annual scourge has been particularly bad this season, and short-term measures—such as shutting factories and restricting car use—have failed to have a significant impact.

In November, doctors declared a public health emergency and schools were shut across the capital.

Fumes from backup generators are a central ingredient in the noxious cocktail, but one company is turning them into ink and paint with technology that can capture up to 90 percent of dangerous pollutants.

Chakr Innovations, started by graduates from the Indian Institute of Technology, has capitalized on the smoke-belching machines that can be heard across the city. Its Chakr Shield is fitted to generators and converts carbon and other fine particles, including the most harmful PM0.3 and PM2.5 specks, into liquefied soot through chemical and heat-exchanging processes.

The captured carbon is washed down with a solvent and processed into ink pigment and paints. “What would have otherwise been a waste is captured and reborn to be used as a raw material again,” said co-founder Arpit Dhupar, donning a t-shirt that says “black is the new green.”

Dhupar was inspired by seeing a diesel generator that was running a roadside sugarcane juice stall and turning the wall behind it black in the process.

Chakr has fitted machines at more than 18 Delhi offices, and 30 other companies have signed up for the technology, including U.S. giant Dell Computers, which will be using Chakr’s ink for printing on its cardboard boxes.

Dhupar said that in 18 months, the machines had collected enough carbon to pollute about 1.5 billion liters of air. “We are running out of clean, breathable air in Delhi and our definitive objective is to make the access to clean air a basic right for everyone,” he said.

Others want to ensure that right extends to animals, including the high-performance ponies that compete on Delhi’s thriving polo circuit.

The Army Polo and Riding Club recently ruled that horses used by the Delhi Army polo team must be allowed twice as many breaks to alleviate the physical stress of playing matches in toxic conditions. “By sheer logic and the levels of pollution that were there in Delhi we thought that it may cause a problem. The longer the pony plays, the exhaustion is that much higher,” said the club’s chief executive, Colonel Ravi Rathore.