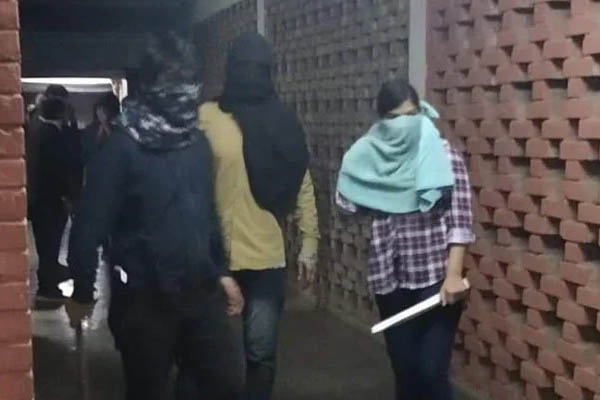 A group of masked men and women raided the hostels of India’s Jawaharlal Nehru University on Sunday, beating up students and teachers believed to be against the ruling, rightwing Bharatiya Janata Party, according to reports in Indian media and on social media.

Pictures and videos shared on Twitter showed several students of JNU in horrifying conditions, profusely bleeding and calling for help. Footage from eyewitnesses and security cameras, meanwhile, showed the armed masked individuals roaming freely on the campus without fear of police action. At least 28 people, including JNU Students’ Union President Aishe Ghosh, were injured during the nearly-two-hour-long assault.

Multiple reports have alleged the masked individuals were allied with the Akhil Bharatiya Vidyarthi Parishad (ABVP), the student wing of the Rashtriya Swayamsewak Sangh of which Prime Minister Narendra Modi was a member. The ruling BJP is also said to be “inspired” by the RSS.

Screengrabs of Whatsapp conversations claim to show ABVP members planning the assault during the day before besieging JNU in the evening. Several teachers have also accused the ABVP of entering the campus and attacking students.

“Female students have locked themselves up inside the girls’ wing in Sabarmati Hostel. These attackers are roaming the corridors armed with rods and sticks…we are under attack,” the JNUSU Twitter handle said. An audio message posted on Instagram by one of the students also urges police and civil society to come to their aid, adding that armed men were especially targeting women and forcing them to lock themselves up in the hostel.

The ABVP has denied the allegations, claiming instead that it was in fact their members that were attacked by members of left-leaning students groups. The BJP has also joined the chorus of condemnations—which includes all major political parties of the country—for the assault, alleging “forces of anarchy” caused the violence.

External Affairs Minister S. Jaishankar, a former student of JNU, posted on Twitter: “Have seen pictures of what is happening in #JNU. Condemn the violence unequivocally. This is completely against the tradition and culture of the university.” Delhi Police have, meanwhile, met a delegation of students and teachers of JNU and vowed to take action.