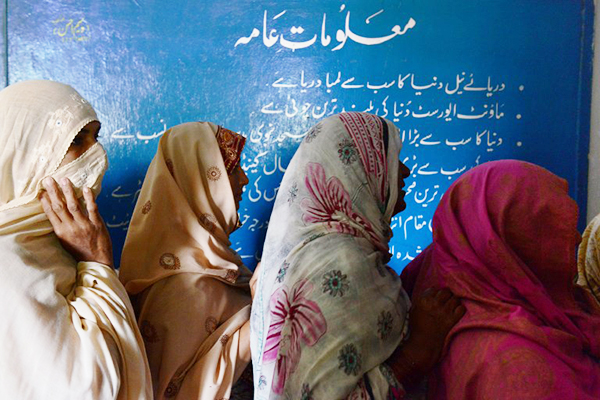 Mission says 9 percent of stations visited were ‘poor or inadequate.’

High turnout in Pakistan’s May 11 elections was a positive step for democracy despite the fact the campaign was marred by violence and irregularities, an EU observer mission said Monday.

Violence in the run-up to polls and on Election Day itself killed over 150 people, according to an AFP tally, as the Taliban targeted parties that made up the outgoing government.

Violence during the campaign and on Saturday had been “terrible, but must not overshadow the achievements of the process,” observer Richard Howitt told a news conference in Islamabad. “The turnout in defiance of the threats against the process was an extraordinary vote of confidence in democracy itself,” he said. “This election was a step forward, but one from which we call on all those elected to sustain their commitment to reforms, in the interests of good government for the people and governance for the state,” he said.

Michael Gahler, chief of the mission, congratulated Pakistan’s Election Commission for making improvements to its election laws and improving its voter roll, as well as ordering repolling in a contested seat in Karachi. But the mission said “women and vulnerable groups” were persistently underrepresented” despite nearly three times the number of women candidates and a higher women’s turnout than at the last polls in 2008.

Observers said voting procedures were mostly followed and that in a “vast majority” of stations all essential material was present, but classified 9 percent of stations visited as “poor or inadequate.” But the mission did not go at all to Balochistan or the semiautonomous tribal belt.

It also only “undertook limited observation” in Karachi, where the mission said observers saw “some serious problems in polling and were also restricted in their activities.”

A separate mission by the National Democratic Institute and the Asian Network for Free Elections recommended that polling results be declared null and void in seats where women were not allowed to vote. The NDI-ANFREL mission head, former Norwegian prime minister Kjell Magne Bondevik, said: “In most places of the country, the vote was a credible expression of the will of the people.”