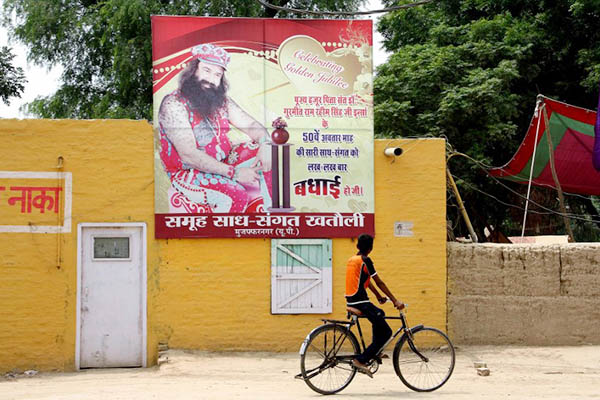 A disgraced religious sect leader was sentenced to life imprisonment on Thursday for murdering a journalist who exposed rampant sexual abuses by the powerful guru.

Gurmeet Ram Rahim Singh, who headed the Dera Sacha Sauda sect with millions of followers worldwide, was convicted by the court last week on charges of ordering the killing in 2002. “The sentence will come into effect once he completes his ongoing jail term of 20 years on charges of rape,” said H.P.S Verma, prosecution lawyer. Verma said three other people along with the guru were also given life imprisonment by the court.

Ram Chander Chhatrapati was shot outside his home after his local newspaper published an anonymous letter describing widespread sexual abuse by Singh at his luxurious sect headquarters in Punjab state.

Three of Singh’s close aides were also convicted by the court and sentenced to life in jail over the journalist’s murder. Prosecutors had demanded the death sentence for all four accused, including Singh.

The 51-year-old was convicted in 2017 of raping two of his disciples, and sentenced to 20 years prison.

The verdict triggered widespread rioting, with tens of thousands of his followers going on a rampage in several north Indian states. Cars were torched and nearly 40 of his devotees killed in clashes with police in Haryana.

To avoid a repeat of the violence, authorities deployed heavy security and deployed drones around Panchkula court, where the verdict was being handed down. Singh received his sentence via video link in prison.

India was ranked the fifth deadliest place for journalists in 2018, according to Reporters without Borders. Six reporters were killed in India last year—trailing war-torn countries like Syria and Afghanistan. Journalists are often targeted by powerful interests, including politicians and criminals.

India is no stranger to scandals involving popular ascetics claiming to possess mystical powers. Since 2015, Singh has also been on trial for castrating 400 of his followers, who alleged that they were promised spiritual gains. Dera defended the sterilization claiming it was done to “safeguard female followers from possible sexual advances.”

Singh is also accused in the murder of his former manager after he threatened to expose his wrongdoings.