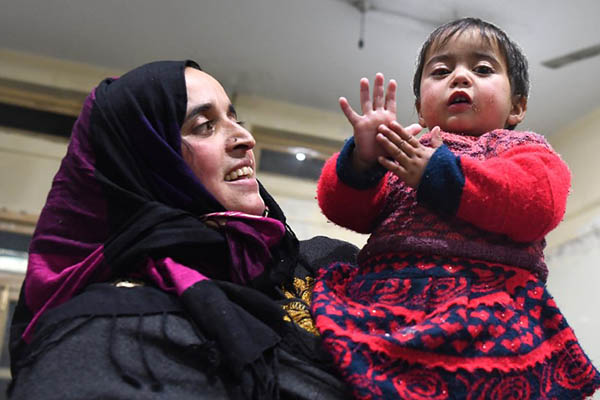 Doctors have removed a metal shard from the eye of a toddler shot in India-administered Kashmir, whose horrific injuries became symbolic of India’s controversial use of pellet-firing shotguns in the conflict-torn region.

Surgeons who operated on Hiba Jan said it was too early to know if the 20-month-old girl would ever use her eye again after being shot with a pump-action gun that discharges high-velocity fragments.

The girl’s parents said they were shot at while trying to escape from clouds of tear gas during clashes between Indian forces and villagers in late November. Her maiming underscored the contentious use of pellet shotguns against civilians in India-administered Kashmir, a disputed Muslim-majority region where protests against Indian rule often turn violent.

“We have removed the pellet, but her eye was devastated,” said one of the surgeons who operated on Hiba at the Shri Maharaja Hari Singh Hospital in Srinagar on Wednesday. “It is difficult to say [if surgery was successful] in the case of an infant, who cannot take a vision test or describe what can be perceived by the damaged eye,” said the doctor, who was not permitted to speak to the press and requested anonymity.

India introduced the officially “non-lethal” 12-gauge pellet shotgun in the part of Kashmir under its control in 2010 when major anti-India protests and clashes with government forces left over 100 dead. Reliable data is hard to come by in the disputed Himalayan region, which is claimed in full by both India and Pakistan. But government data from 2017 revealed the weapon killed 13 people and injured more than 6,000 in eight months alone—including nearly 800 with eye injuries.

“We deal with such devastation every day at the hospital. Hiba is no different,” her surgeon said.

An insurgency in Kashmir against Indian rule has left tens of thousands of people dead since 1989—most of them civilians. But this year has been the deadliest since 2009, with more than 500 people killed so far. Authorities said on Wednesday that incidents of violence were on track to double this year compared to 2017.

Various rebel groups seeking independence or a merger with Pakistan have fought against half a million Indian troops stationed in the territory. Kashmir has been divided between India and Pakistan since their independence from British colonial rule in 1947.