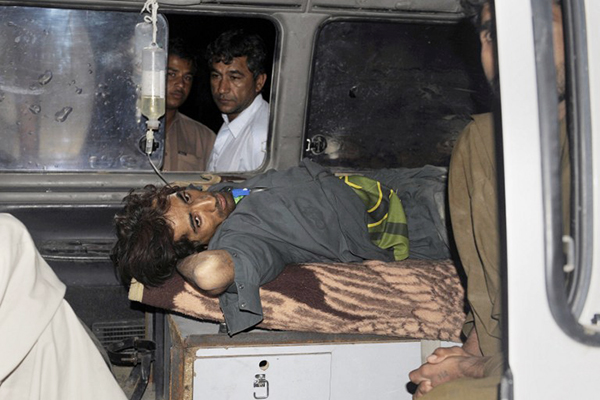 An injured Pakistani being ambulanced in Dalbandin, April 17. Banaras Khan—AFP

The death toll in Pakistan from yesterday afternoon’s 7.8-magnitude earthquake has reached 41, according to field estimates, with some 150 injured.

The damage appears to be restricted to two impoverished districts in Balochistan—Washuk and Panjgur—with a population of between 10,000 and 15,000, according to the Army, which is managing rescue and relief operations.

“Some 500 Army and Frontier Corps troops, including doctors, paramedics, engineers, rescuers” and five Army helicopters have been mobilized, says the military’s Inter Services Public Relations department. “A field medical facility has been established in Mashkhel, 1,800 kilograms of food, 1,000 kilograms of medicine, and 200 blankets have been distributed so far.” Two more trucks of food and 350 tents are expected to reach the area tonight.

Pakistan’s National Disaster Management Authority, which is coordinating efforts with the Army, says no damage has been reported in any other province. It says nine bodies have been recovered so far from the rubble of mud homes in Balochistan, a province wracked by sectarian, separatist, and tribal violence. NDMA says 150 people have been injured and that 35 are confirmed dead. (The Army puts the casualty count at 41.) In addition, 700 houses have been damaged in Mashkhel town, and some buildings are “partially damaged” in Panjgur. Balochistan’s Provincial Disaster Management Authority has also provided medicine, food, and tents to the affected districts.

Measuring 7.8 on the Richter scale, the epicenter of the earthquake—which struck at 3:44 p.m. (Pakistan time) yesterday and lasted 13 seconds—was 86 kilometers from the Iranian city of Khash, according to the U.S. Geological Survey. The seismic activity occurred 15.2 kilometers below ground. (Early Wednesday, an aftershock measuring 5.7 ran through the same area.)

The earthquake jolted Pakistan and neighboring countries leading to evacuations in high-rise cities like Karachi that gnarled traffic, and impromptu prayers at mosques. According to reports on Pakistani cable news channels, the earthquake also led to a rise in cellphone activity that temporarily choked bandwidth as people called and texted their families to check in with them.

‘All workers of Jamat in earthquake areas should reach affected sites for rescue and aid. Leave no stone unturned and save lives,’ said Hafiz Saeed.

Tremors were also felt in Afghanistan, Iran, the United Arab Emirates, India, Kuwait. Until yesterday, Iran was believed to have been the hardest hit. However, the country now claims it suffered fewer-than-expected casualties from the Tuesday quake. (At least one woman has been killed in Iran and 1,700 people have lost their homes.)

The Iran Nuclear Regulatory Authority also informed the International Atomic Energy Agency that the earthquake caused “no damage to the Bushehr Nuclear Power Plant or other nuclear facilities,” according to the IAEA’s website. “INRA said records showed no fixed high-level radiation sources were installed in the area of the earthquake,” it says. “The IAEA has made an offer of good offices to Iran, indicating it is ready to help the country obtain any assistance required to ensure the safety of radioactive sources such as medical equipment that may have been affected by the earthquake.”

Some 30 people were killed when an earthquake struck near Bushehr a week ago.

Pakistan has also offered assistance to Iran. “In this hour of grief, the people of Pakistan stand by their Iranian brethren,” President Asif Ali Zardari wrote to his Iranian counterpart. “I am confident that the great Iranian nation will overcome this calamity with courage and fortitude.”

Meanwhile, U.N. Secretary-General Ban Ki-moon reached out to both Pakistan and Iran in the aftermath of the earthquake. “I understand that the damage is less than might have been expected for an earthquake of this strength,” he said. “Still, there are deaths and terrible damage. I express my profound condolences to the families of the victims, and to the governments and people of both countries.” He said the U.N. was ready to assist “if asked to do so.”

“The United States sends our deepest condolences for those lost in the earthquake in southeastern Iran and western Pakistan,” said U.S. Secretary of State John Kerry on Tuesday. “Our thoughts are with the families of those who were killed, those who were injured, and with those communities that have suffered damage to homes and property. We stand ready to offer assistance in this difficult time.”

Iran accepted U.S. assistance after the Bam earthquake in 2003, which killed some 26,000. Pakistan also received American help after the 2005 earthquake in the north which resulted in 73,000 casualties.

As it did after the 2005 earthquake and the 2010 floods, Jamat-ud-Dawah, the charity founded by Lashkar-e-Taiba’s Hafiz Saeed, who has a $10-million U.S. bounty on his head, rapidly mobilized its resources to help with earthquake rescue and relief ops. “All workers of Jamat in earthquake areas should reach affected sites for rescue and aid. Leave no stone unturned and save lives,” Saeed posted on Twitter. “We will serve to whatever extent we can in affected areas of Iran and Pakistan hit by [the] tragic earthquake, Inshallah.”

Jamat assessments of the damage are at odds with government estimates. Its official Twitter account claims more than 1,000 have been injured “in [a] city of 74,000” while most homes in Mashkhel have been “completely destroyed” or are “still standing, but in very bad conditions.” It says the Frontier Corps barracks in Panjgur have also been damaged, and that its teams are active in Panjgur and Kharan districts. “Our sources reporting more casualties in Panjgur than [the] media,” it said, adding that many of the injured had been taken across the border into Iran for medical care.

For many, the trauma from Tuesday will take time to overcome. Abdul Bari, a 32-year-old tailor who broke his leg during the earthquake, said he saw houses razed to the ground from the tremors within seconds. “It was like doomsday.”