Egypt’s First Parliament Since 2012 Sworn In 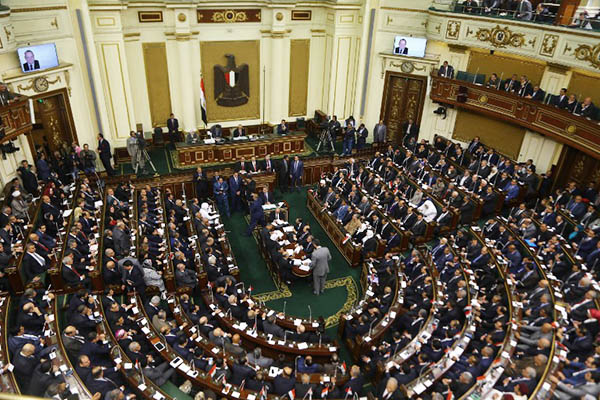 Egypt’s new parliament convened on Sunday, in its first session in three years, after a legislative election dominated by pro-government candidates in the absence of any opposition.

Analysts have said the new 596-member parliament is expected to strengthen the hand of President Abdel Fattah al-Sisi and rubber-stamp his government’s decisions. It was elected last year in two phases with a low turnout of just 28.3 percent after authorities launched a deadly crackdown on the Muslim Brotherhood movement of ousted Islamist president Mohamed Morsi.

Hundreds of supporters of the now blacklisted Brotherhood have been killed and thousands jailed, while hundreds more have been sentenced to death. The group had dominated the previous parliamentary election held between late 2011 and early 2012. That assembly was dissolved months later by a court on technical grounds.

At Sunday’s inaugural session, the new parliamentarians took the oath one at a time, some of them holding Egypt’s flag. Later they elected law professor Ali Abdel-Al as speaker.

Deputies going into the heavily secured parliament building in Cairo said the first task ahead was to deal with hundreds of bills that need to be ratified. “The most important thing is to deal with more than 300 [draft] laws and we have to do that in the next 15 days,” said M.P. Saeed Hassasein. “We have agreed among parliamentarians to work day and night until we ratify those laws,” he added.

The bills have accumulated since the last Brotherhood-dominated parliament was dissolved by the constitutional court in June 2012. M.P. Osama Heikal also said that 15 days were needed to review the bills and ratify them.

Lawmakers were elected under a complex system of independent candidates and party lists. All party list seats went to the For Love of Egypt coalition, an alliance of parties and groups that support Sisi, the army chief who deposed Morsi before winning a presidential election in May 2014.

The individual seats went to a mix of party-affiliated candidates and independents. The new assembly also includes 28 members appointed by Sisi.