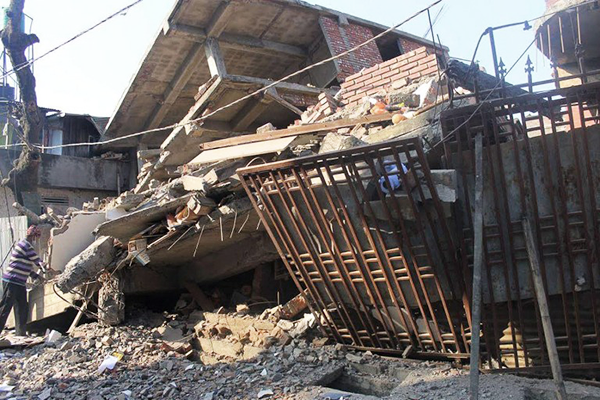 Five of the deceased were Indians, while three others died in Bangladesh.

At least eight people were killed and scores injured Monday when a strong 6.7 magnitude earthquake struck northeast India, sending panicked residents fleeing into the streets even hundreds of kilometers away in Bangladesh.

Five were killed in India, the government said, while three people died in Bangladesh after suffering strokes or heart attacks following the early-morning quake.

Anurag Gupta of India’s National Disaster Management Authority said buildings had been damaged in Imphal, capital of Manipur state where the quake was centered.

“Five people are confirmed dead and 33 have been injured in Imphal. A six-storey building in the capital was partially damaged and some small structures have also developed cracks,” he told AFP.

An official at one of the main hospitals in Imphal however said more than 50 people had been admitted since the quake with head injuries and limb fractures. Imphal resident Deepak Shijagurumayum whose house was severely damaged described scenes of chaos after the quake.

“Almost everyone was asleep when it struck and were thrown out of their beds,” Shijagurumayum told AFP by phone from the city. “People were crying and praying in the streets and in open spaces. Hundreds remained outdoors for several hours fearing aftershocks.”

The Press Trust of India (PTI) news agency said buildings had collapsed near the epicenter and the electricity supply had been cut in parts of Manipur, which borders Myanmar and has a long history of separatist unrest.

Nearly 60 victims were being treated for their injuries in hospitals in Bangladesh, where the earthquake triggered panic on the streets of major cities.

One 23-year-old Bangladeshi man died after suffering a stroke when he ran out of his house, while another two people—a farmer and a university official—died of heart attacks, police said.

One of the wounded was a university student who jumped from a fourth-floor balcony and was in a critical condition. There were similar scenes in the northeast Indian city of Guwahati, the main commercial city of the mineral-rich state of Assam, where an AFP correspondent said residents were “in a state of shock” after being woken by the shaking.

Indian Prime Minister Narendra Modi tweeted that he had spoken to local authorities in Assam about the impact of the quake.

The tremors were felt as far away as Kolkata some 600 kilometers distant in the Indian state of West Bengal, where buildings shook. “Many people were seen coming out of their homes in panic,” said local resident Rabin Dev.

India’s seven northeastern states, joined to the rest of the country by a narrow sliver of land, are located in an area of frequent seismic activity.

In 1950, dozens of villages were swallowed in a string of disasters generated by a powerful earthquake whose epicenter was in Tibet but which caused the greatest destruction to India’s Assam state.

More than 1,500 people died in the quake, which had a magnitude of 7.6, and its disastrous aftermath of landslides and floods.

There were no immediate reports of casualties on the Myanmar side of the border, a remote and sparsely populated area that suffered widespread damage this summer from landslides caused by torrential monsoon rains. The USGS has raised its assessment alert for casualties and damage to orange, meaning there is a 33 percent chance of between 100 and 1,000 fatalities.