End of the Abbottabad Affair? 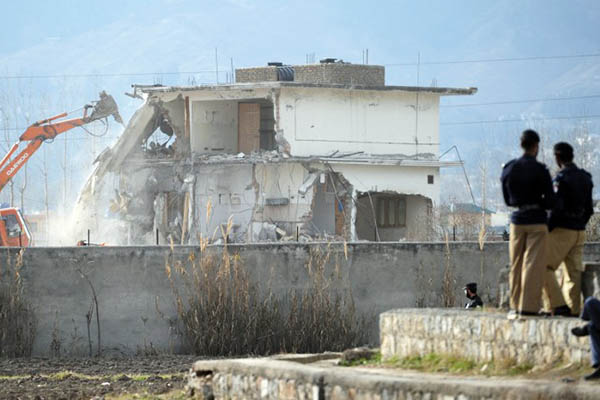 With Osama bin Laden’s widows, children, and grandchildren expected to be flown to Saudi Arabia on April 18, Islamabad hopes an embarrassing chapter comes to a close.

Pakistan hopes to conclude its almost year-long effort to clean up after Abbottabad by deporting the late Al Qaeda chief Osama bin Laden’s three widows and 11 children and grandchildren to Saudi Arabia next Wednesday.

“A special charter flight will take all of bin Laden’s family—three wives, two daughters ages 17 and 21, and nine minors—to Saudi Arabia on April 18,” Muhammad Aamir Khalil told Newsweek Pakistan. “All documentation work has been completed and everything will be cleared by Pakistani authorities soon.”

Bin Laden’s country of birth had been hesitant to accept the family members but yielded to pressure from Islamabad, which is struggling to live down the embarrassment of May 2, 2011, when U.S. Navy SEALs found and killed bin Laden in the garrison town of Abbottabad.

Afterhours on Feb. 25, Pakistani authorities began demolishing bin Laden’s final hideout, erasing that last reminder of what the U.S.—and Pakistanis themselves—saw either as the security establishment’s monumental incompetence in tracking down the terror kingpin, or, less charitably, its complicity in shielding him from the world.

Abbottabad didn’t just affect AmPak relations. It also further strained the always-tenuous relations between the Army and the elected government. Last year, as the Army and its Inter-Services Intelligence pressed the government over a sensational, anti-Army confidential memorandum sent to the then head of the U.S. Joint Chiefs of Staff, Adm. Mike Mullen, allegedly at the behest of Husain Haqqani, the country’s former envoy to Washington, the government hit back. Speaking in Parliament, Prime Minister Yousaf Raza Gilani asked rhetorically, “We want to know who gave Osama bin Laden a visa?”

With elections coming up and the government locked in several intense battles with the Supreme Court, it can do without the distraction of also taking on the Army. Islamabad hopes the expulsion of bin Laden’s family will cap the Abbottabad affair and assist in detoxifying civil-military relations. The interior ministry spoke about the deportation months ago for the same effect: bin Laden and his family were in Pakistan illegally without the knowledge of the government—or the Army.

Foreign Office and interior ministry officials declined comment for purposes of this story.

Bin Laden’s family members were taken into Pakistani custody on May 2 last year. They have since been kept at a number of ISI safe houses, including in Islamabad. The deportation hearings took place at one of these houses, in the capital’s G-6 sector, which was declared a sub-jail. Personnel from nearby Adiala Jail kept watch on the family in addition to police and ISI officers. The family members were formally arrested on March 3 and pleaded no contest to charges of impersonation, illegal entry, and illegal residency. Judicial magistrate Shahrukh Arjumand sentenced the bin Ladens to 45 days’ detention, which their lawyer Khalil says was “lenient.”

During the course of the proceedings, Khalil spoke with his clients through a Pakistani government official fluent in Arabic. “They were very frustrated,” says Khalil of the family. “They were eager to go back to their respective countries.”

Khalil added that Fateh’s brother Zakarya, who came to Pakistan on special invitation in November and was living separately, would accompany his sister and her five children to Saudi Arabia on Wednesday. The family will fly to Sana from there. Widow Fateh’s statement to Pakistani interrogators was leaked last month and conveyed the ease with which bin Laden and his family apparently moved from city to city, house to house. Fateh also claimed to have given birth to four children in Pakistan, one of them in a government-run hospital.

“Fateh has much to talk about,” says Talat Masood, a defense analyst. “She might be asked to pen her memoirs.” Of bin Laden’s soon-to-be-deported Saudi widows, Khairiah Sabar and Siham Sabar, the former Army general is less optimistic. “They and their children will be kept under tight wraps by the Saudi government, they will be kept anonymous.”

The deportation also indicates that Pakistani, and likely U.S., authorities have extracted whatever information they could from the family. “The Americans and Pakistanis collected a trove of data from Abbottabad, so the family’s deportation a year later makes no difference,” says Hasan-Askari Rizvi, author of The Military & Politics in Pakistan. “Pakistan followed a legal process and took its time to ensure nobody could question the due process.”

In the meanwhile, Rizvi also hopes that bin Laden’s youngest wife will soon dish all about her life in Pakistan and with bin Laden. Don’t expect Pakistani authorities to queue up for the book.