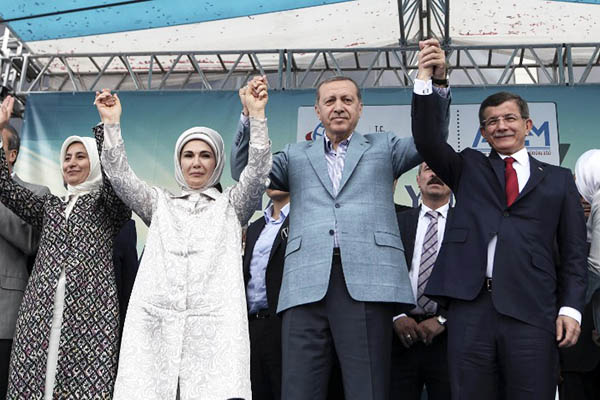 President insists he is not campaigning for the Justice and Development Party, as it stands to lose parliamentary majority.

Brushing off complaints he is brazenly violating the constitution, Turkish President Recep Tayyip Erdogan is playing an increasingly active role in Turkey’s legislative election campaign as the ruling party faces its biggest ballot box challenge since it came to power.

Latest opinion polls suggest that the ruling Islamic-rooted Justice and Development Party (AKP) could see its vote tumble in the June 7 election from the last polls in 2011 and even lose its parliamentary majority, sparking unusual expressions of alarm in pro-government media.

Erdogan, who became president in 2014 after more than a decade as premier, is supposed to be apolitical as head of state but in recent days has been campaigning with relentless vigor. The face of prime minister and AKP leader Ahmet Davutoglu—a former foreign minister who lacks Erdogan’s populist charisma—stares out from election posters but it is Erdogan who has taken hold of the campaign, while insisting he is merely “on the side of the people.”

Erdogan on Tuesday alone gave a morning speech in Istanbul, opened alongside Davutoglu a new airport in Turkey’s Hakkari province with a speech several times longer than that of the premier, before speaking to an evening rally in Ankara. On Saturday, the president will also speak at a major rally in Istanbul with Davutoglu to celebrate the anniversary of the 1453 Ottoman conquest of Istanbul.

Such is the controversy over Erdogan’s behavior that former president Abdullah Gul—a co-founder of the AKP—has declined an invitation to attend the Istanbul rally at the weekend, the Radikal online daily reported.

The AKP prides itself on being one of the greatest election-winning machines in a major democracy, winning every poll since it pushed the ultra-secular military-rooted old order from power in 2002 elections. And it has to be on top form now, with Erdogan calling for the party to win two thirds of the 550 seats in parliament to change the constitution and create the presidential system that he yearns for.

“Erdogan is by definition not running in legislative elections, but the June 7 ballot is very much about him,” said Marc Pierini, visiting scholar at Carnegie Europe. “He is therefore very much involved personally in the campaign.”

Yet with the economy, for so long the AKP’s trump card, showing signs of fragility and Davutoglu unable to match Erdogan’s rhetorical firepower, opinion polls are indicating its vote could fall sharply from almost 50 percent in 2011 and more than 46 percent in 2007. While polls should be treated with caution in Turkey, two published in the last week made troubling reading for the AKP—with the Konda group giving it 40.5 percent of the vote and SONAR 41 percent.

The polls suggested that far from winning a two thirds majority, the AKP could even fail to win a simple majority, which would force it to form a coalition to stay in power.

In an opinion piece entitled I Want to Warn You Before It Is Too Late, which gained huge attention across the political spectrum in Turkey, well-connected pro-AKP political commentator Abdulkadir Selvi said many previous AKP voters were unsure of voting for the party. “Turkey might face waking up to a coalition on the morning of June 8,” he wrote. “We [the AKP] used to be known for modesty. Now we are being remembered for our arrogance,” he wrote in the Yeni Safak daily.

Critical for the outcome in terms of seats will be whether the pro-Kurdish People’s Democratic Party (HDP) passes the tough 10 percent threshold needed to have M.P.s in parliament. “If the HDP makes it in the parliament, this will be a game-changer and the executive presidency will be more difficult to reach,” said Pierini.

Coalition politics seems an anathema for the dominant AKP but its most natural partner would be the Nationalist Movement Party (MHP) set to come third rather than the second placed Republican People’s Party (CHP) secular opposition. “This is the first election since the AKP first won a single-party majority in 2002 that there is a possibility of a coalition government,” Michael Harris of investment bank Renaissance Capital said.