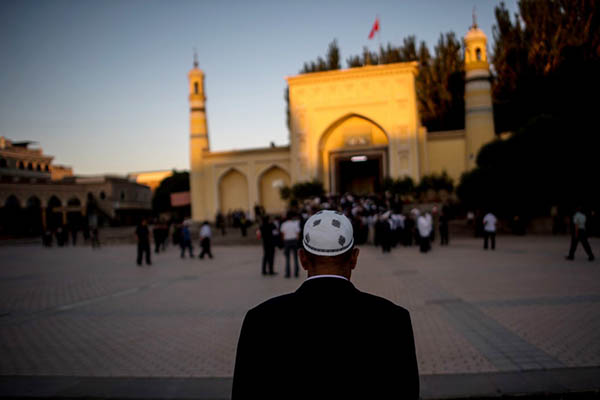 A recurrence of the Urumqi riots which left nearly 200 people dead a decade ago is hard to imagine in today’s Xinjiang, a Chinese region whose Uighur minority is straitjacketed by surveillance and mass detentions.

A pervasive security apparatus has subdued the ethnic unrest that has long plagued the region. Last week, Xinjiang’s vice chairman Aierken Tuniyazi told the U.N. Human Rights Council no terrorist attacks have occurred in the region in three years. But experts say the absence of visible violence belies the ongoing repression of minority culture and inequality between the Han Chinese majority and Uighurs—who are mostly Muslim.

“There’s a lack of trust,” said Reza Hasmath, a professor at the University of Alberta who has studied ethnic relations in Xinjiang.

Tough policies such as the re-education camps “are going to suppress any potential violence,” he told AFP. “But it still creates a generation of distrust with Han people among Uighurs.”

Xinjiang, home to most Uighurs in China, has for decades been struck by episodes of inter-ethnic violence. But the riots that broke out in Urumqi, the regional capital, on July 5, 2009, were a seminal event for Xinjiang.

In the years since, divisions between the two groups have only “magnified,” she told AFP, with members of both ethnic groups fleeing mixed neighborhoods. “It’s still very strained,” she added, recounting Uighur-Han interactions she observed on a work trip last year. “It’s all pretense on the surface.”

In recent years, Xinjiang authorities have clamped down on public displays of religion and rounded up an estimated one million mostly Muslim Turkic-speaking minorities into internment camps in the name of counter-terrorism.

Tuniyazi told the rights council the centers have “scored remarkable achievements” as trainees have “broken away from the spiritual control of terrorism and extremism.” But former inmates have said they were incarcerated for merely following Islamic traditions, such as wearing long beards and face veils.

A Kazakh businessman, who spent nearly two months in a camp, told AFP the facilities only had one goal: to strip detainees of their religious belief. Inmates were forced to sing patriotic songs every morning and eat pork, a violation of Islam’s religious restrictions, he said.

Dozens of mosques and religious sites around Xinjiang have also been demolished or stripped of their domes since 2017, according to satellite images. Observers say racial profiling is prevalent, with Han Chinese often waved through police checkpoints while Uighurs are stopped. “The Han Chinese in the region more or less are given special treatment, and don’t have to undergo the type of scrutiny in terms of checks that Uighurs do,” said Timothy Grose, a China ethnic policy expert at the Rose-Hulman Institute of Technology. “I think this will certainly add to the discontent between the two groups,” he said.

Along with its security clampdown, Xinjiang authorities are actively pushing Uighurs to assimilate. According to a 2018 central government document, Xinjiang is popularizing the use of Mandarin at schools. The aim is to ensure “ethnic minority students can master and use the national language” by 2020.

The local government is also trying to encourage inter-ethnic marriage. National census data from 2010 shows only 0.2 percent of Uighurs were married to Han people.

In May, the Xinjiang government published new rules to reward mixed students by upping the number of bonus points they receive on the nationwide college entrance exams, while reducing them for those whose parents are both ethnic minorities. Meanwhile, waves of mass migration from China’s heartland have raised Xinjiang’s Han population from six percent in 1949 to 37 percent in 2015, according to the latest official figures.

The growing influx of Hans could exacerbate ethnic tensions if higher income jobs continue to be skewed towards them, said Hasmath, who cites 2002 and 2012 census data in a paper on socioeconomic inequality between the two groups. If Han people get the best jobs and tend towards hiring others within their group, “minorities are pushed out of the best jobs and the best wages,” he added.