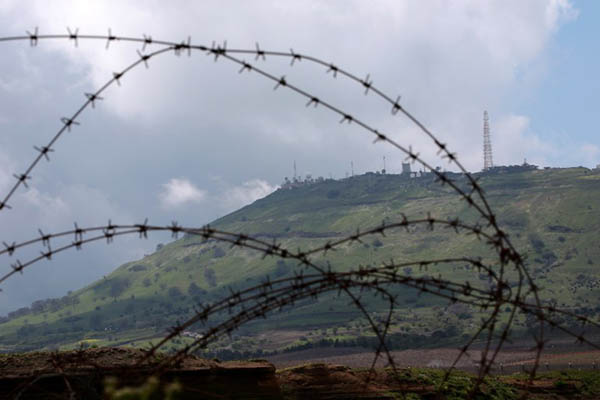 Five European countries that sit on the U.N. Security Council on Tuesday rejected U.S. President Donald Trump’s decision to recognize the Golan as Israeli territory and voiced concern the move could have broad consequences.

Belgium, Britain, France, Germany and Poland insisted that the European position had not changed and that the Golan remained Israeli-occupied Syrian territory, in line with international law enshrined in U.N. resolutions.

“We do not recognize Israel’s sovereignty over the territories occupied by Israel since June 1967, including the Golan Heights, and we do not consider them to be part of the territory of the state of Israel,” Belgian Ambassador Marc Pesteen de Buytswerve told reporters. “We raise our strong concerns about broader consequences of recognizing illegal annexation and also about the broader regional consequences,” he said, flanked by the ambassadors of the four other countries.

Three U.N. Security Council resolutions call on Israel to withdraw from the Golan, which it seized from Syria in the 1967 Six-Day War and annexed in 1981, in a move that was never recognized internationally.

On Monday, Trump signed a proclamation in which the United States recognized the strategic plateau as Israeli territory, breaking with decades of U.S. policy.

U.S. Acting Ambassador Jonathan Cohen told a council meeting on the Middle East that Washington had made the decision to stand up to Syrian President Bashar al-Assad and Iran. “To allow the Golan Heights to be controlled by the likes of the Syrian and Iranian regimes would turn a blind eye to the atrocities of the Assad regime and malign and destabilizing presence of Iran in the region,” said Cohen. There “can be no peace agreement that does not satisfactorily address Israel’s security needs in the Golan Heights,” he added.

Russia and China spoke out against the U.S. decision during the council meeting, as did Indonesia and South Africa, two countries that strongly support the Palestinians. The council is scheduled to discuss the U.S. move on Wednesday when it meets to discuss the future of the peacekeeping force deployed on the Golan, known as UNDOF.