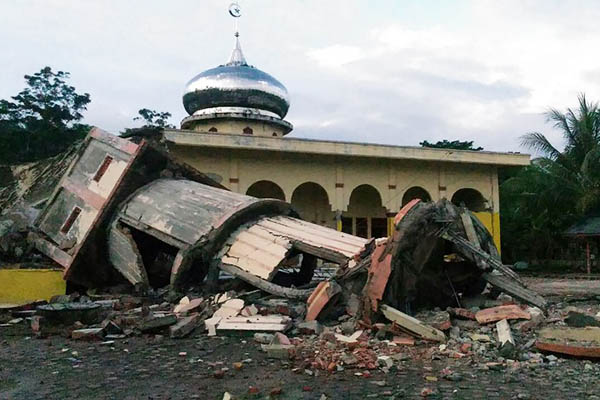 Indonesians face quake destruction that has left over 100 people dead.

When the earthquake struck before dawn, Marthonis and his family had no time to run out of their home before it collapsed into ruins around them. Pinned under concrete in the pitch dark, Marthonis—the chief of Kuta Pangwa village—was not alone.

Every house in his small hamlet was flattened when a 6.5-magnitude quake tore through Aceh province in Indonesia’s west, killing more than 100 people. Marthonis’ mother was among the dead, crushed in her sleep.

“My mother didn’t survive. Maybe it was her destiny to die in a disaster like this,” said Marthonis. It was not her first encounter with nature’s fury: she had survived the destruction of the 2004 Indian Ocean earthquake, which killed 170,000 in Aceh alone.

But for Marthonis, there has been little time to grieve. Fifteen people from his village died in the quake—so many from one family they were buried in a single grave. As daylight arrived, similar tragedies were unfolding across Aceh, and the scale of devastation becoming clear.

Hundreds of homes, mosques and businesses had been reduced to rubble, burying families in their sleep. A frantic search for survivors began, many clawing at the rubble with their bare hands.

Rahmawati, 35, was among those pulled from the wreckage five hours after the quake struck. But she was the only one in her family who made it out alive, her husband and two children were crushed by falling debris. “I accept this as fate, because in the end we all will be called back to Allah,” she told AFP.

As aid pours into Aceh, the villagers from Kuta Pangwa—like thousands of others across the province—must prepare for a second night eating at temporary kitchens and sleeping in shelters.

Hundreds more will spend another evening in ill-equipped health clinics and overcrowded field hospitals, waiting to see a doctor. As the rubble is slowly cleared, and victims laid to rest, the enormous task of rebuilding will begin.

But it’s impossible for Marthonis to contemplate at this stage, as he still comes to grips with the reality his village—and beloved mother—is gone. “Every one of my villagers’ homes is destroyed,” he said, gesturing to piles of grey rubble where a neighborhood once stood. “Nothing can be occupied again.”