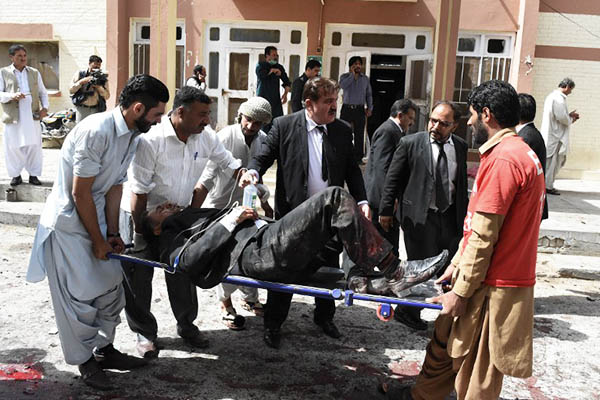 At least 70 people killed, over 100 others injured in suicide attack.

A faction of the Pakistani Taliban, Jamaat-ul-Ahrar, claimed responsibility on Monday for a suicide bombing that struck the Civil Hospital in Quetta, the capital of Balochistan province, killing at least 75 people and injuring over 100 others. It was the second group to claim responsibility for the blast after an alleged spokesman for the Islamic State Khorasan Province also claimed responsibility.

In addition to the bombing, Jamaat-ul-Ahrar also claimed responsibility for the target killing of lawyer Bilal Kansi, with a spokesman vowing more attacks “until the imposition of an Islamic system in Pakistan.” Ahrar has also said it was behind the deadliest attack in Pakistan so far this year, a bombing in a crowded Lahore park that killed 75 people on Easter Sunday.

Senior health officer Dr. Omar Baloch told Newsweek the death toll in the suicide bombing had hit 70. “We have received 62 bodies at Civil Hospital Quetta while the Combined Military Hospital has received the rest,” said Baloch, who also serves as the secretary (Health) at the provincial health ministry. “There are many injured in critical condition and I cannot say if they will survive,” he added.

Earlier, a doctor at the Civil Hospital had said he had personally counted the dead and confirmed that 52 bodies had been received at the institution. “We have referred over 35 injured to the Bolan Medical Complex and the Combined Military Hospital since we don’t have the space or facilities to treat them,” he said on condition of anonymity as he is not authorized to speak to media.

Video footage showed bodies strewn on the ground, some still smoking, among pools of blood and shattered glass as shocked survivors cried and comforted one another.

In a statement issued to media, Balochistan Chief Minister Nawab Sanaullah Khan Zehri said the blast had been a suicide attack and it had targeted the casualty ward of the Civil Hospital in Quetta. Condemning the attack, he vowed to take strict action against all terrorist elements in the province. He also urged Islamabad to act against the alleged financiers of such bombings. “Our intelligence agencies have captures several Indian agents and we have to investigate [India’s spy agency] RAW’s financial backing for terrorism in Balochistan,” he said.

Rehmat Saleh Baloch, the provincial health minister, said the dead included several lawyers and journalists who had been covering a protest by the legal fraternity against the killing of Bilal Kansi, the head of the Balochistan Bar Association. Jamaat-ul-Ahrar has claimed responsibility for killing Kansi. It claims to have struck Civil Hospital after the body was transfered there for a postmortem. Shortly after its arrival, a large group of lawyers gathered outside the hospital to demand justice and protest his assassination.

The military has been deployed in and around the city’s hospitals, which have been placed under a state of emergency, added Baloch.

Provincial interior minister Sarfraz Bugti alleged the attack on Kansi had been instigated to gather a large group of people at the hospital. “First they [terrorists] shot dead Bilal Anwar Kansi. Then, as a large number of lawyers reached the Civil Hospital to protest, they detonated a bomb,” he claimed.

The explosion severely damaged the casualty ward at the hospital, requiring the people injured in the blast to be transferred to neighboring hospitals for treatment. “Due to the damage caused to the casualty ward, we are shifting the injured to the Bolan Medical Complex and the Army Hospital,” said government spokesman Anwar-ul-Haq. He defended the hospital’s security measures, saying there was no way to provide ‘foolproof’ security without inconveniencing the same people it was designed to serve. “The terrorists always opt for soft targets due to strict security in other parts of the city,” he added.

Pakistan Army chief Gen. Raheel Sharif reached the Civil Hospital in the afternoon to visit the injured and meet officials to discuss the prevailing security situation. Prime Minister Nawaz Sharif is also due to visit the hospital later in the day, according to sources within the P.M. Office.

Earlier, in a written statement, Prime Minister Sharif has condemned the bombing and directed the provincial government to ensure the attackers are found and punished to the full extent of the law. “No one will be allowed to disturb the peace of the province,” he said in the statement.

A purported spokesman for the Islamic State Khorasan Province had earlier claimed responsibility for the brutal attack in a phone call to journalists in Balochistan. The spokesman threatened to stage similar attacks across Pakistan, claiming the attack in Quetta was merely the first of many.

This is totally a bogus story, table story—–who is the spokespeorn of IS Khurasan.
The Jamaat ul Ahrar has claimed resposibilty for the attack. very poor journalism